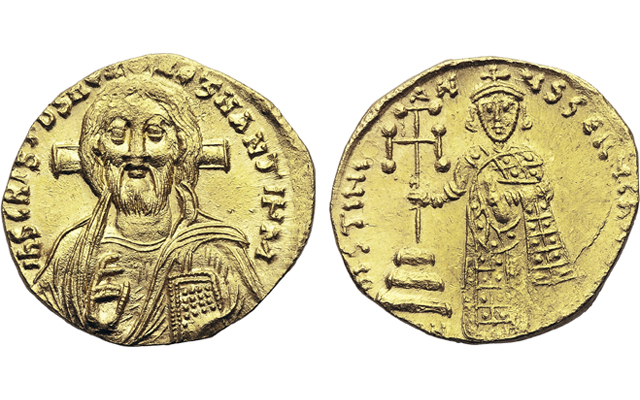 The first coins intended to depict Jesus were the gold solidii of Justinian II. The circa 685 to 695 coins bear on the obverse the familiar image of the savior with long hair, as seen above. A more tamed look appears on issues from Justinian II’s second reign, from 705 to 711 (not shown).

So, coins exist showing the Star of Bethlehem and coins were issued by the Magi themselves, but what about the “king of kings” that they came to see?

The first coined image depicting Jesus Christ appears on the coins of the Byzantine Empire, under Emperor Justinian II.

The circa 685 to 695 gold solidus (during Justinian II’s first reign) first display the traditional, familiar image of Jesus with long hair and a beard, before yielding to a clean-shaven look with curly hair on gold solidi of 705 to 711, during the ruler's second reign.

In 754 a church ruling found that depictions of Christ were unacceptable, and many artifacts bearing such images were destroyed, leaving the coins among the few remaining pieces of the era depicting Christ accessible outside museum collections, according to Kenneth Bressett, writing in Money of the Bible, third edition.

What more perfect item to celebrate Christmas than a coin showing Jesus Christ?

For that reason, we’ve included it in Coin World’s “12 Days of Christmas” list.