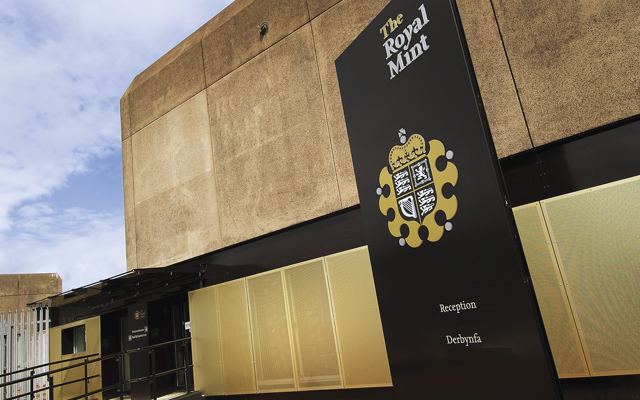 The entrance to the Royal Mint, which is located in Llantrisant, Wales, near Cardiff. From London, it takes about two hours by train plus 20 minutes by car to get to the site in the Welsh countryside.

Though it may be off the beaten path in the Welsh countryside, Britain’s Royal Mint is the center of coinage innovation in the United Kingdom, and a world coin producing powerhouse.

When the United Kingdom began a decade-long effort to decimalize its coinage in the 1960s, a growing need for circulating coins led the British Treasury to relocate the Royal Mint to the Welsh countryside.

Amid the Cold War, fears that a London location would come under attack are said to have factored in the move.

Today the threat to the Royal Mint’s position in the global coin business is less sinister, and comes from Canada, Australia, Austria and others, as mints in those countries and others elbow each other in competition for bullion sales, foreign coinage contracts and collector coin market shares.

Take a tour of the Royal Mint’s 35-acre site at Llantrisant, about 10 miles northwest of Cardiff in Wales, as Coin World did last fall, and the enormity of their tasks — and the effort being expended to meet them — becomes crystal clear.

Making our way to the mint

The train ride from central London to Llantrisant takes about two hours — if there are no delays.

Since we were leaving London around 8 p.m., fortunately the journey was swift and arrival was on time. After departing the train in Cardiff and flagging a cab, we made it to a hotel near the Mint to spend the night.

The next morning, after breakfast, we were off to the Mint for an early start.

Though the grounds are surrounded by gates and heavily guarded by Ministry of Defence soldiers, visitors can proceed to a welcome center, where a miniature exhibit currently explores the minting process. During our stop, designs commemorating World War I, as used or proposed for coins and medals, were on display.

Before entering the production area, coins, cell phones and other devices must be placed into visitors’ lockers. Stroll out of the main entrance and you’re on your way to the giant buildings that house the plating and minting operations. A few other, smaller buildings contain offices, a gift shop and museum, and other places like the employee lunchroom.

The first machine you encounter in the main building, where melting, rolling and blanking occur, is the melting furnace, its boiling cauldron of copper cathodes and nickel bars steaming at the 900 degrees Celsius necessary to meld the metal together to create the coinage strip that rolls out of the casting furnace.

After cooling and scalping (the removal of debris from the surface) the strip is sent through another rolling machine to reduce it to the proper thickness. Then it is advanced to the blanking machine where blanks are punched out at a rate of 500 per minute. The blanks are annealed and then rimmed to form a proto-rim. The facility has four casting lines that can each produce at the rate of 1 inch of coil per minute.

The section was a lot busier just a few years ago, said Evan Thomas, a worker in the casting area, before the advent of plated coinage.

Plated coinage is one factor that the Royal Mint is counting on to drive its growth in the coming years.