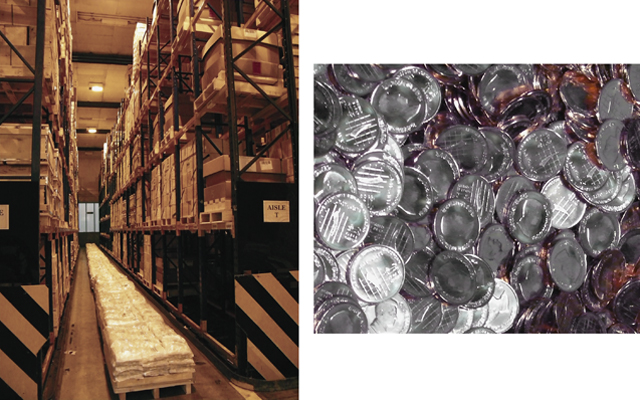 A close-up of 1-qirsh coins struck for Jordan, one of many international clients of the Royal Mint, right. Other nations whose circulating coins were in production or awaiting shipment during our visit (besides the United Kingdom) include Hong Kong, Kenya, Trinidad and Tobago, and Uruguay, some seen here in one row of a large warehouse, left.

According to the Royal Mint, its facility produces 15 percent of the world’s coinage.

That figures include the approximate 1.4 billion circulating coins for the United Kingdom struck in the fiscal year ended March 31, 2013 (the most recent figure available), and the 1.5 billion coins and blanks that the Royal Mint delivered to customers around the world that year. According to the Royal Mint, its global business was more than the next two competitors combined.

In its most recent annual report, the Royal Mint’s slogan was “Making Money for Everyone.”

While that phrase might not literally be true, it sort of seems that way — during our visit, Coin World witnessed coinage in production or completed for Hong Kong, Jordan, Kenya, Trinidad and Tobago, and the United Kingdom in its circulating coin production cell. This production area is populated with 36 Graebener and Schuler presses, pumping to the rhythm of profit.

Though it’s natural to believe that the enormous reach of the British Empire explains the Royal Mint’s customer list, today the foreign circulating coin business is waged on a global scale, as mints with excess capacity (many of them tasked with turning a profit by their government or private entities whose existence can’t be subsidized) vie for business to remain profitable.

Foreign circulation contracts generated £39.1 million of sales during the 2012/2013 fiscal year. During our visit, tens of millions of finished coins in various containers were stacked on pallets on shelves soaring to the ceiling in rows maybe 80 to 100 feet long, ready for shipment around the globe.

As important as foreign circulation markets are to the Royal Mint’s profitability, it is also relying on expanding markets for its bullion coins abroad.