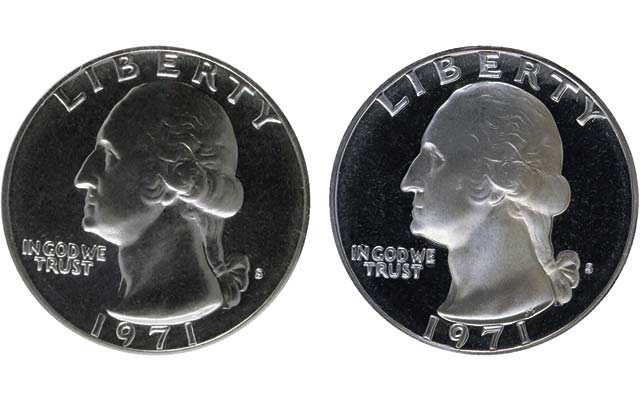 A common criticism of modern coins is that they all look the same.

This characteristic appearance is called “cameo.”

Coins from the early part of that decade, though, are commonly seen with little or no cameo contrast. And coins from 1971 are scarce in Ultra Cameo. Consider for example the 1971-S Washington quarter dollar.

NGC and PCGS have graded 2,629 examples in all grades. Only 119 of them are designated Ultra Cameo. A coin graded Proof 69 trades for under $30, while the record auction price for a Proof 69 Ultra Cameo quarter was set in 2007 when an example traded for $7,475 in an auction by Heritage.

The scarcity of these coins is explained by the method of Proof die manufacture employed from the 1950s into the 1970s.

Chromium-plated dies were dipped in a solution of nitric acid to etch the surface. The fields were then, in multiple steps, buffed to a shine with a diamond-dust polish.

The acid etching left on the devices created a delicate frost that wore away quickly, so only a small number of strikes produced coins with strong cameo contrast.

A change was introduced in 1971 that significantly increased the number of cameo coins produced from each die pair.

Instead of acid etching the dies, the dies were sandblasted with very fine sand. This required that the field areas of the coin be covered with masking before sandblasting, a process that added considerable labor. But the end results were worth it.

Certified populations demonstrate the effectiveness of this change. Of the 2,294 examples of Proof 1972-S quarter dollar graded by NGC and PCGS combined, over a fourth of them (591 coins) are Ultra Cameo. The change is even more dramatic for Proof 1973-S quarter dollars. Of the 3,149 coins graded, 2,494 of them, nearly 80 percent, are Ultra Cameo.