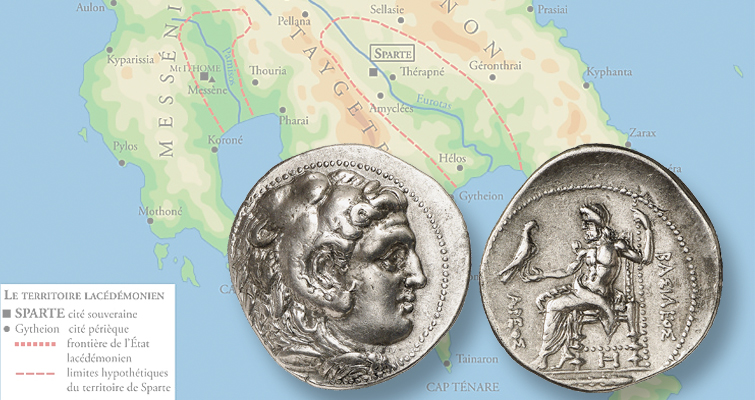 Among the rarities of Spartan coinage is this silver tetradrachm of King Areus I from the mid-260s B.C. It bears his name, but uses the designs of Alexander III “the Great.” 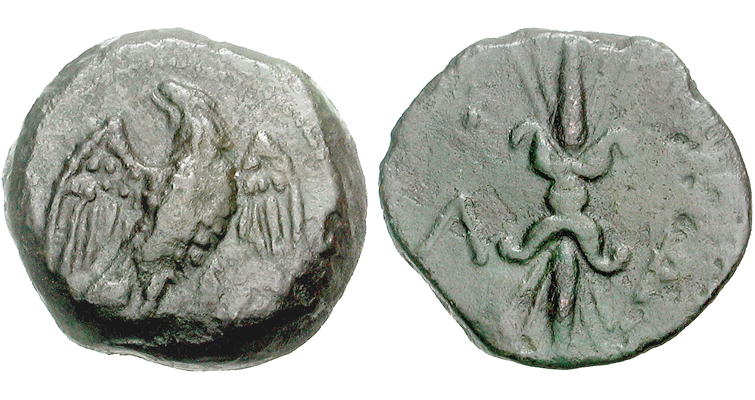 The designs on this bronze of Cleomenes III reflect the close relationship this Spartan king shared with the Greek king of Egypt, Ptolemy III (246 to 222 B.C.). 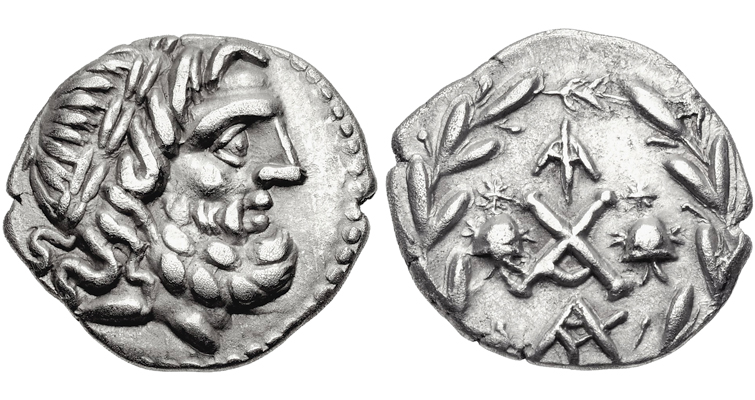 This silver hemidrachm shows the head of the god Zeus and the monogram of the Achaean League, a political confederacy in which Sparta held membership. 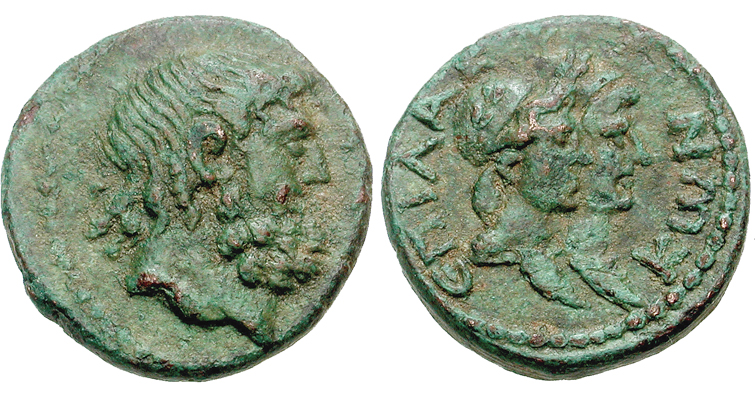 The issuer of this Spartan bronze, C. Julius Laco (2 B.C. to A.D. 31), was given authority in Sparta by Rome’s first emperor, Augustus. It portrays Heracles and the Dioscuri. 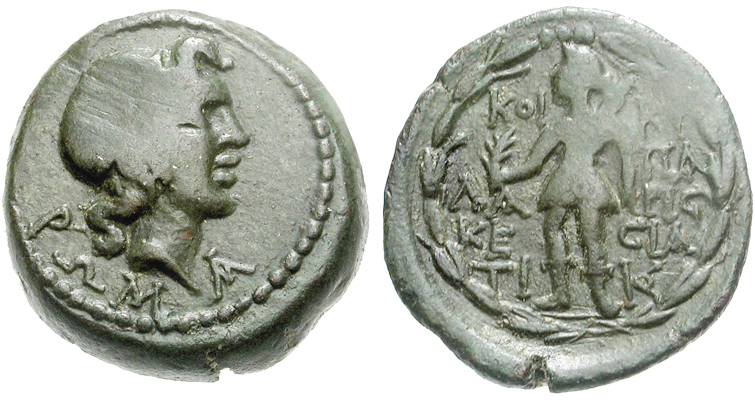 Roman power loomed heavy in the Peloponnesus, as seen by the bust of Roma on this bronze of the Koinon of the Lacedaimonians, issued circa 72/71 B.C., perhaps in Sparta.

Among the foremost cities of ancient Greece was Sparta, famed for its militaristic social structure. Though the Spartans were accomplished in many regards, they maintained a low profile when it came to coinage, a medium of exchange they found both effeminate and unappealing.

Whereas Athens struck untold millions of coins over a nearly 800-year period, Sparta issued precious few coins in comparison. This city had few issues of any consequence, which places them in high demand among collectors of ancient Greek coins.

The Spartans were so opposed to the idea of coinage that their Lycurgan constitution forbade the possession and use of coinage within the city’s frontiers. This hostility toward coinage was not breached until the mid-third century B.C., more than 250 years after Athens had begun producing coinage on a large scale.

Even then, the first Spartan coins, comprised of silver tetradrachms and obols, were struck in very small quantities. They were issued at the end of the reign of the Spartan King Areus I (309 to 265 B.C.), or very soon afterward. As such, they likely were produced for the Chremonidean War (267 to 261 B.C.), during which Sparta joined other Greeks in opposition to the Kingdom of Macedon.

Whatever the circumstances that caused Sparta to issue its first coins, it occurred at a time when Sparta’s power had been greatly weakened by the rise of kingdoms throughout the Greek world.

Just two other Spartan kings issued silver tetradrachms: Cleomenes III (235 to 221 B.C.) and Nabis (207 to 192 B.C.). Both struck issues bearing their portraits, with examples of the former being very rare and the latter being known by just one example. However, Nabis also issued some very rare tetradrachms that paired the head of the goddess Athena with the seated figure of the hero Heracles.

Later in Spartan history, after the tetradrachm denomination had been abandoned, the Spartans began to issue small silver coins that typically weighed about 2.2 to 2.5 grams. They were struck in two denominations: hemidrachms (half-drachms) and triobols (three obols). The former shows the head of the god Zeus and the monogram of the Achaean League (a political confederacy in the Peloponnesus) and the latter bears the head of Heracles and an amphora (a transport container) flanked by the caps of the Dioscuri.

The earliest of these small silver issues were hemidrachms dated to circa 175 to the 140s(?) B.C. They were struck while Sparta was a reluctant member of the Achaean League and were made in small quantities using dies engraved in fine style. Somewhat larger issues of hemidrachms and triobols were produced from the 90s through the 50s B.C., but even those are scarce today.

By the era of Spartan “small silver” the city’s power had all but evaporated, and in 146 B.C. it had become an ally of Rome, whose power in the Greek world had grown immensely with its defeat of the Macedonian King Perseus (179 to 168 B.C.). While the acquisition of Macedon was a significant gain for Rome it did little for the cities of Greece, whose rivalry with the Macedonians was merely replaced with one with the equally imperialistic Romans.

It is currently believed that the last Spartan silver coins — triobols of the Heracles/amphora-and-Dioscuri caps design — were struck in about 50 B.C. Thereafter, about another 300 years of Spartan coinage remained, though it was comprised entirely of base metal issues, most of which were struck in very small quantities.

Bronze coinage at Sparta had begun with issues of King Cleomenes III and had continued well into the era of Roman domination. The earliest types, from the 220s B.C., pair a standing eagle with a winged thunderbolt. These designs are thought to have been derived from the contemporary coinage of Ptolemy III (246 to 222 B.C.), the Greek king of Egypt who had been a strong supporter of Cleomenes III.

Aside from an exceedingly rare issue of bronze attributed to King Nabis, the Spartans do not appear to have struck bronze coins again until the 70s B.C. The first of these coinages, which likely was struck in Sparta circa 72/71 B.C., was in the name of the Koinon of the Lacedaimonians, a confederacy of cities in the region in which Sparta was located.

After a slow start, the momentum for Spartan bronze coinage had increased by the 40s and 30s B.C., when Roman civil wars waged by Brutus, Cassius, Marc Antony and Octavian (Augustus) found their conclusions in battles fought on Greek soil.

The collective rules of C. Julius Eurycles and his son spanned 31 B.C. through A.D. 31, and enjoyed the support of Rome’s first two emperors. We are fortunate that these dynastic rulers struck bronzes that bore a variety of designs.

Thereafter there were but two episodes of coinage at Sparta: a brief and isolated issue of circa 198 to 212 under the Severan emperors, and an issue of the mid-260s. The latter bears the portraits of the Emperor Gallienus (253 to 268) and his wife, the Empress Salonina, and it has not been missed by historians that their issuance coincides with a terrifying invasion of Greece led by barbarian Goths and Heruli. 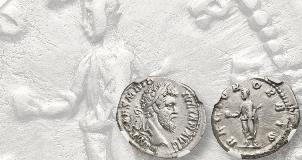