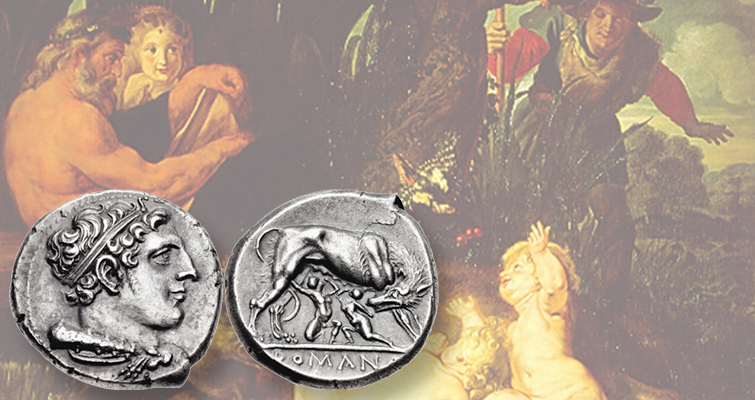 The wolf-and-twins motif first appeared on coinage as a reverse type on a silver didrachm of the Republic thought to have been struck circa 275 to 255 B.C. 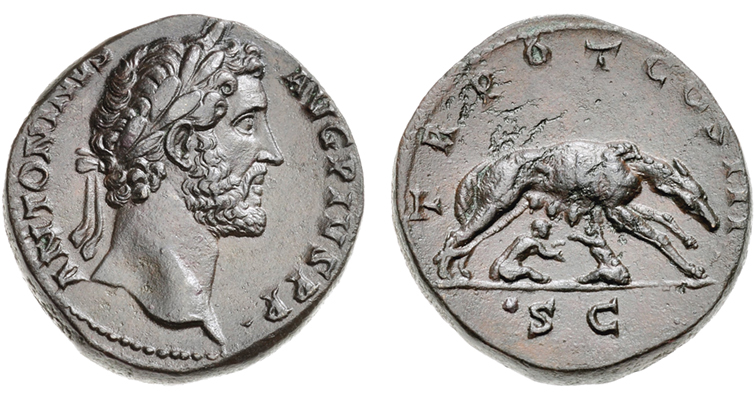 This brass sestertius of the Emperor Antoninus Pius (A.D. 138 to 161) shows the she-wolf and twins. It was struck in anticipation of the 900th anniversary of Rome, observed in A.D. 148. 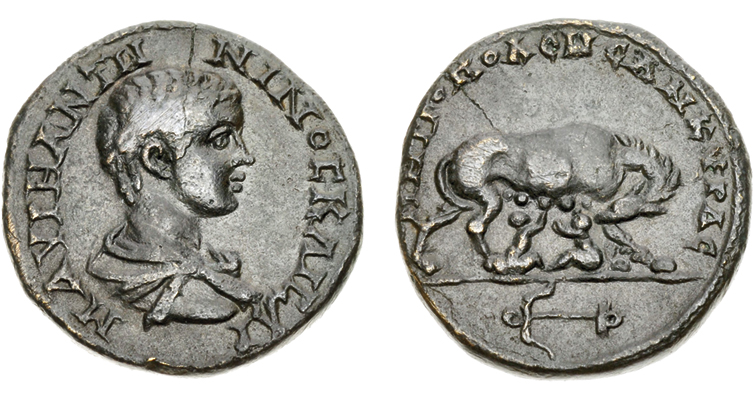 Even in the provinces of Rome, coins portrayed the she-wolf suckling twins. This bronze was struck for the Emperor Caracalla (A.D. 198 to 217) at Ancyra in Galatia. 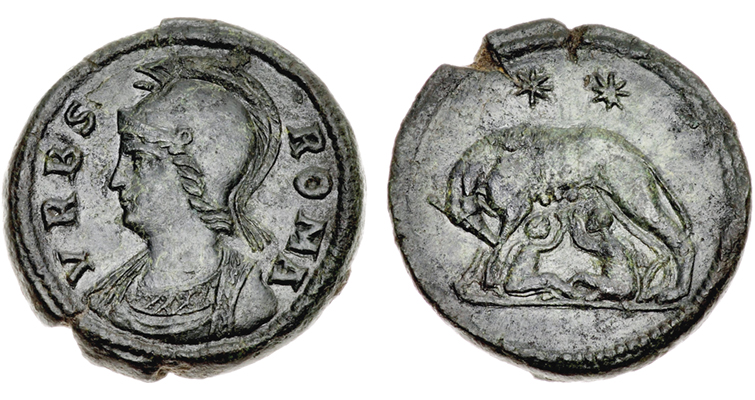 Millions of small copper coins with the she-wolf and twins were struck by Constantine I (A.D. 307 to 337). This bronze medallion of that type may have been struck as late as 347. 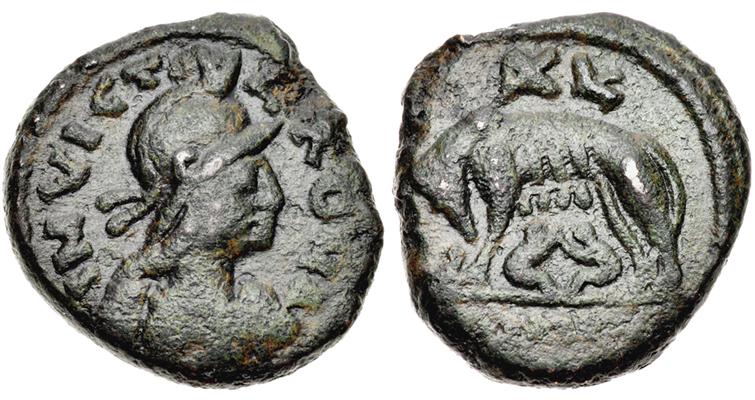 The Ostrogoths, who assumed power in Italy after the fall of the Roman Empire, struck large bronzes, such as this copper 40-nummus piece, portraying the she-wolf and twins.

Among the most familiar symbols of ancient Rome is the she-wolf suckling the infants Romulus and Remus. It harkens back to the very origins of Rome — at least in legend. The twin-founders overcome a tumultuous start to their lives, having been exposed to the wilderness as infants to be cared for only by a she-wolf.

According to the popular mythology of the writer Livy, Rome was founded at the spot where the infant twins had washed ashore on the banks of the Tiber, and subsequently were raised. When they began to build the city that would become Rome, Remus wished it to be named Remuria and Romulus preferred Roma, and they quarreled over who should rule the new city.

In one version they left the decision to the gods of the countryside. The signs of augury were disputed and a fight ensued in which Remus was killed. Another tradition records that Romulus killed Remus in an act of vengeance after his brother mocked him by jumping over the half-built walls of the new settlement.

The she-wolf-and-twins design, which celebrates Rome’s twin-founders, figures prominently in Roman art. It makes a number of high-profile appearances on coinage, though perhaps not as many as one might expect.

Most coins bearing this design were struck at Rome and at other imperial mints, yet a great many were also struck at provincial mints located throughout the Roman world, from the Balkans to Asia Minor and Syria. Occasional issues were even struck in Sicily, Judaea and Egypt.

The first use of this design was on a silver didrachm of the Republic, which generally is dated to circa 275 to 255 B.C. It was struck at a time when the Romans were issuing very few silver coins, and many scholars associate the issue with the First Punic War (264 to 241 B.C.). It shows on it is obverse the head of young Hercules and on its reverse the wolf and twins.

The scene next occurs as a full design on a copper sextans generally dated to circa 217 to 215 B.C. This time the wolf and twins are used on the obverse as the primary type and are paired with an eagle holding a flower in its beak.

The two other notable appearances during the Republic are on silver denarii. Both times the wolf and twins are used as a reverse type, being paired with the helmeted head of Roma as the obverse. The first of these, struck circa 137 B.C., portrays the wolf and twins in a larger context of foundation mythology: they appear under a fig tree bearing three birds, and are accompanied by a shepherd, all of which adds details of their discovery at the foot of the Palatine Hill.

In the second instance, on denarii of circa 115 to 114 B.C., the wolf and twins are a sub-design, appearing at the feet of Roma, who sits on a pile of shields. She is accompanied by two birds, perhaps ravens, who are emblematic of augury.

The next occurrence of note would not occur for nearly another two centuries. The wolf and twins are used as a reverse type for coins of A.D. 77 and 78: silver denarii of Titus, and silver denarii and gold aurei of Domitian, brothers who eventually would be emperors, but who at the time held the subordinate title of Caesar.

Sometimes on these issues a boat appears beneath the wolf and twins, which may allude to the cradle in which the twins were delivered safely to the shores of the Tiber.

During the mid-second century A.D. the wolf and twins were used prominently as a reverse type by the emperors Hadrian (117 to 138) and Antoninus Pius (138 to 161). In the latter instance, Pius used it (along with other designs relating to early Roman lore) in anticipation of the 900th anniversary of the foundation of Rome, which occurred in 148.

On Pius’ coins the scene often is nestled within a cave or a grotto, which almost certainly represents the Lupercal, the cave on the Palatine Hill in which the she-wolf is said to have suckled the twins.

Some final uses of theme

About a century later Rome was ready to celebrate its millennium during the reign of the emperor Philip I (244 to 249). The she-wolf and twins appear as a reverse type on this emperor’s coins in relation to that event, which occurred at a time when Rome was in a particularly vulnerable state and had little to celebrate.

Later still in that century, the design was used by the rebels Maxentius (307 to 312) and Carausius (286 or 287 to 293), both of whom had established outlaw regimes. They made liberal use of designs that spoke to the faded glory of the Roman world, no doubt hoping to stir emotions among their subjects that might improve the chances of survival for the new rulers.

Late in the reign of Constantine I “the Great” (307 to 337) the she-wolf-and-twins design was again used, though in this case as a specific reference to the city of Rome, for in 330 this emperor had founded a new capital in the East, Constantinople.

Starting in 330, Constantine began to issue untold millions of small copper coins celebrating the two capitals, with the one dedicated to Rome pairing the helmeted head of Roma with the she-wolf and twins. Perhaps as late as 347, in anticipation of Rome’s 1,100th anniversary, that same design was used for bronze medallions issued at the Rome mint by Constantine’s sons.

The last major use of this iconic design in ancient times was by the Ostrogoths, “barbarians” who by 476 had taken control of the Italian peninsula from the Romans. Large, thick copper coins issued by the Ostrogoths in the late fifth and the early sixth centuries A.D. mimic the familiar design of Constantine I that paired the helmeted head of Roma with the she-wolf and twins. 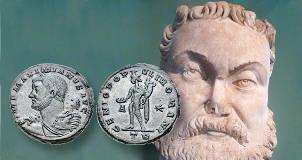 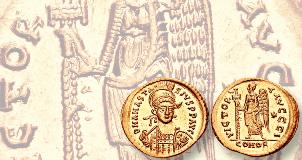