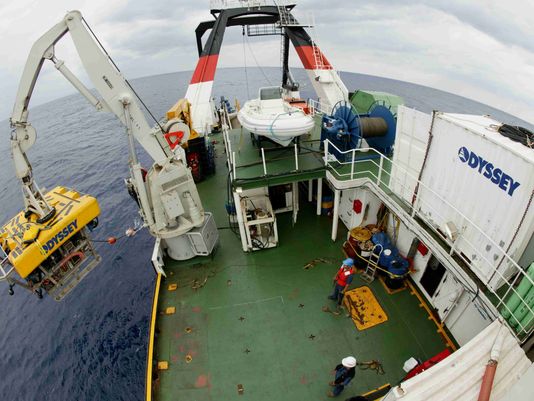 Odyssey Marine Exploration's recovery equipment of the type used to recover gold from the site of the SS Central America shipwreck.

Odyssey Marine Exploration announced on May 5, 2014, that it has recovered nearly 1,000 ounces of gold during the first reconnaissance dive to the SS Central America shipwreck site on April 15.

According to the firm's press release, the gold recovered included five gold ingots and two Coronet $20 double eagles. One dated 1850 and another dated 1857-S.

The SS Central America was a 280-foot wooden three-masted side-wheel steamship launched in 1853. It sank off the coast of South Carolina on Sept. 12, 1857. Recovery operations occurred between 1988 and 1991.

The April 2014 dive itself took two hours and is being conducted by Odyssey under contract with the receiver of Recovery Limited Partnership. Odyssey announced the decision on March 3, 2014. The excavation, recovery and conservation will be conducted by Odyssey on behalf of the partnership. In return, Odyssey will receive 80 percent of recovery proceeds until a fixed mobilization fee and a negotiated day rate are paid. Thereafter, Odyssey will receive 45 percent of the recovery proceeds.

Bob Evans, chief scientist and historian for Recovery Limited Partnership, said, "This dive confirms for me that the site has not been disturbed since 1991, when I was last there."

Read Coin World's past reporting on the SS Central America  for additional background on the contested history of this shipwreck.

During the March 3 announcement, Ira Owen Kane, the court-appointed receiver who represents Recovery Limited Partnership, said, "After conducting an exhaustive review of the extensive amount of historical research available on the shipwreck, our experts estimate the shipwreck still holds a commercial shipment of gold that was valued at approximately $93,000 in 1857, as well as a substantial amount of passenger gold valued in 1857 between $250,000 and $1,280,000.”

What other treasures lie at the site? Follow this story as it develops with Coin World.