Mint temporarily out of stock for Smoky Mountains coin 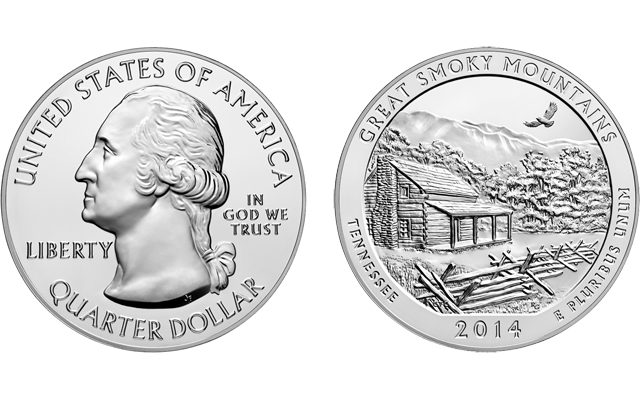 Production of the bullion version of the 2014 Great Smoky Mountains 5-ounce silver bullion coins has resumed after the Mint’s sales to authorized purchasers depleted initial inventory.

“The United States Mint is in the process of producing additional inventory,” the Mint’s notice to authorized purchasers reads. “We will likely have additional coins in a few weeks.”

White said the Great Smoky Mountains 5-ounce silver bullion quarter dollars will be struck to demand, up to a maximum of 40,000 coins.

The 5-ounce silver bullion coins are sold by the Mint through the same series of authorized purchasers approved to purchase the Mint’s other bullion issues, namely the American Eagle and American Buffalo series, for secondary market distribution.

The 5-ounce silver bullion coins are struck at the Philadelphia Mint without any Mint mark. A collector version, also with an Uncirculated finish, is produced bearing the P Mint mark. The collector Uncirculated versions are sold by the U.S. Mint directly to the public.

Both the bullion and collector Uncirculated versions bear the same modified George Washington common obverse paired with the America the Beautiful reverses that appear on the 24.3-millimeter copper-nickel clad and .900 fine silver versions.

Construction began in the basement of the Philadelphia Mint during the summer of 2009 to accommodate the press.

The multi-ton press is hydraulically supported atop a 4-foot-deep, concrete-lined pit equipped with sensors to detect any equipment failure, as well as any possible infiltration of water, since the Philadelphia Mint is located close to the Delaware River.

The press has a rating showing its capacity to strike with up to 1,000 metric tons per square inch, to bring up the desired relief on the coins.

Gräbener’s GMP 1000 press is rated as capable of striking pieces with a maximum diameter of 85 millimeters (3.346 inches), but it can be adjusted to accept a diameter up to 120 millimeters (4.724 inches), depending on blank composition.

The press can be adjusted to register from 20 to 40 strokes per minute.

The 5-ounce silver bullion coins are being struck at the rate of 22 coins per minute, with two strikes per coin at 450 to 500 metric tons of pressure per strike to bring up the obverse and reverse coinage designs.

U.S. Mint officials indicate the press can be modified to execute other production if necessary.