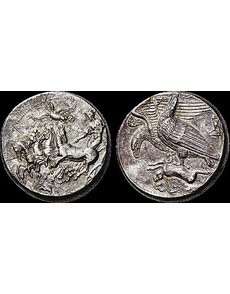 An ancient Greek silver coin once in the legendary Nelson Bunker Hunt Collection re-established a record price in an auction Oct. 17.

The circa 409 to 406 B.C. silver decadrachm of Agrigentum, a seaside city-state in Sicily also known as Akragas or Acragas, realized 2,714,000 Swiss francs ($2,918,810 U.S.), including the 18 percent buyer’s fee. The price established a new record price for a Greek silver coin and outpaced the estimate of 1.75 million Swiss francs. The record was established in Numismatica Ars Classica’s auction No. 66, which included a large offering of the Hunt Collection coins.

The previous record holder for a Greek silver coin appears to be the silver tetradrachm of Naxos, Sicily, believed to be engraved by the “Aitna Master.” An example of that coin realized $994,500 in early 2012 as part of the Prospero Collection sold Jan. 4 by the New York Sale consortium (Baldwin’s, Dmitry Markov and M&M Numismatics).

A private European collector won the bid for the Agrigentum decadrachm, according to Arturo Russo of Numismatica Ars Classica, beating out two other bidders to secure the coin, which was described as having “Attractive old cabinet tone,” and a planchet crack at 12 o’clock on the reverse, but otherwise grading Extremely Fine. Fewer than 10 examples of the coin exist, according to NAC.

The price for the Agrigentum decadrachm approaches, but does not eclipse, the record price for any Greek coin, which is $3,802,500, paid for a unique circa 350 to 300 B.C. gold stater of Pantikapaion, a city on the Black Sea in ancient Greece. That coin also sold in the Prospero Collection.

The Agrigentum decadrachm once held three records — the most valuable non-U.S. coin, Greek coin and Greek silver coin — achieved after selling June 19, 1990, in the first part of the Hunt Collection sale, where it realized $572,000, including the buyer’s fee. Hunt had purchased the coin from Bruce McNall of Numismatic Fine Arts in a 1980 private transaction for a reported $1 million, as noted in the Nov. 26, 1980, issue of Coin World.

In an era when provenance of ancient coins is becoming increasingly important, few if any provenances rival the Hunt Collection. The collection was formed by the oil executive whose attempt with his brother to corner the silver market in the late 1970s and early 1980s ultimately caused the market’s collapse.

Hunt’s collection of Greek and Roman coins was sold in four auctions by Sotheby’s in 1990 and 1991. The sales established multiple record prices at the time and are considered landmark auctions of ancient coinage.

The Akragas decadrachm that starred in the Oct. 17 auction is described by NAC as “Undoubtedly one of the most prestigious, important and fascinating Greek coins. A masterpiece of the finest Classical style, work of two skilled master-engravers.”

Researchers believe the unsigned coin was engraved by Myron and Polyainos, who signed other coin designs for that city. The obverse shows a quadriga driven by a charioteer, above which is an eagle with a snake in its talon, credited to Myron.

The reverse shows two eagles perched on a dead hare lying on a rock and is credited to Polyainos.

The coin dies were engraved “in a realistic style charged with energy that was not exceeded at any other Greek mint,” according to NAC.

The original intent of issue has been bandied about by scholars over the years, with the belief that they are commemorative medallions rather than coins the most popular theory.

“Whether coins or medallions, they are among the great prizes of ancient numismatics, and no doubt were intended to show that the mint in Acragas could equal or exceed the best issues of Syracuse,” according to the firm.

Some experts suggest the coins date earlier than 409 to 406 B.C. and share a connection with the chariot race (stadion) victory by Exaenetus of Acragas at the 92nd Olympic Games, held in 412 B.C. Many other experts tie the issue to the period shortly before the fatal Carthaginian invasion of 406.