No shortage of supply for paper money collectors 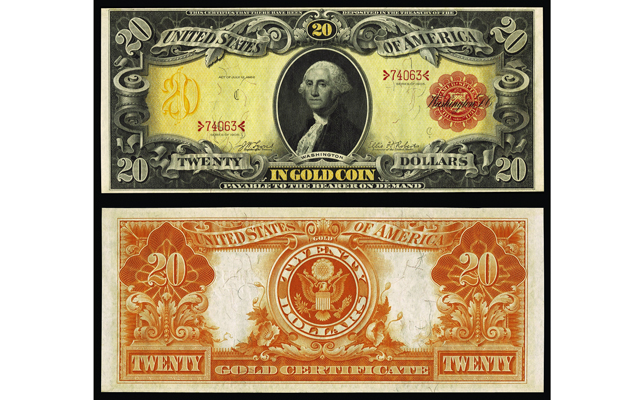 This 1905 $20 gold certificate, nicknamed a "Technicolor" note, will be offered at the Heritage Auctions Jan. 7 to 12 Currency Signature Auction, during the FUN convention in Orlando, Fla.

There is no shortage of supply in the paper money market. And another massive Heritage Currency auction will be held Jan. 7 to 12, 2015, at the Florida United Numismatists show in Orlando.

Of note is world paper money, which has its own separate catalog of 1,000-plus lots. This is a reflection of both increased collector interest in world notes and the realization that with the United States paper money market relatively strong, attractive buying opportunities exist in an otherwise overlooked field.

However, that said, the world sale is still dwarfed by the immense amount of American notes to be offered — running the gamut from Colonial through all federal issues and more than 1,450 lots of obsolete currency, which is another category drawing new blood.

Such is not the case among most other type notes.

Two offerings of the same note in various grades are worth mentioning. Five “Technicolor” Series 1905 $20 gold certificates are offered, cataloged as F-1179 and F-1180, including a F-1179 note graded by Paper Money Guaranty as Gem 67 Exceptional Paper Quality that is said to be the finest known. Multiple examples of the famous Series 1901 $10 “Bison” United States note, F-114 to -121, are also offered.

This issue is so common in lower grades that thousands are known. They sell for as little as a few hundred dollars in Fine up to a few thousand in a respectable Extremely Fine. It is a different story at the high end. Three Uncirculated examples of the F-119 Series 1901 $10 “Bison” note are in the sale: a Very Choice New 64, a Gem Uncirculated 65, and a PCGS Currency graded “superb” Gem New 67 Premium Paper Quality.

The latter note is said to be the finest known, and a price in the low five-figure range should be expected, which would at least double expected results for the other two notes.

These, among many examples, illustrate the increased attention at the high end of the market to outsized prices for outsized grades.

Often the higher the grade, the more subjective the pricing.

Bidding on these “super notes” requires study, knowledge, and not a small amount of courage.