Lew cleans up his signature 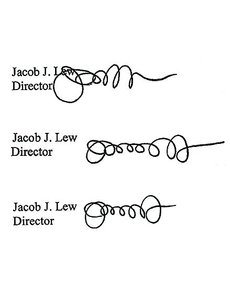 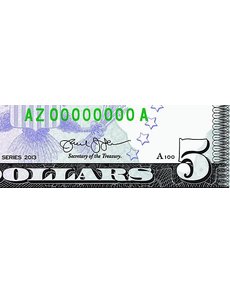 Close-up of Treasury Secretary Jacob Lew’s facsimile signature as it will appear on Series 2013 $5 Federal Reserve notes due to be released sometime this fall. 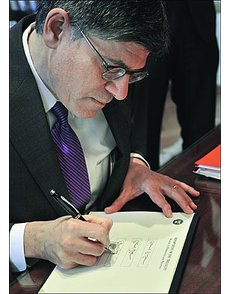 Treasury Secretary Jacob Lew signs his signature for the Bureau of Engraving and Printing to use in making new printing plates. Lew’s facsimile signature will first appear on Series 2013 $5 Federal Reserve notes due to be released sometime this fall.

On June 18, Treasury officials released photos of Lew’s signature that will first appear on Series 2013 $5 Federal Reserve notes to be issued sometime this fall.

Lew’s signature will appear alongside that of U.S. Treasurer Rosa “Rosie” Gumataotao Rios.

Lew’s original signature — a series of various sizes of loops, thus the nickname — can be found on dozens of documents from his time as President Obama’s White House chief of staff and before that as director of the Office of Management and Budget.

However, since his nomination Jan. 10, when the president joked that Lew’s signature might devalue the dollar, Lew apparently has been practicing his penmanship in anticipation of the Bureau of Engraving and Printing asking for his signature to make new printing plates.

“The first name arguably looks more like ‘Paul’ than Lew’s real first name, Jacob. But the middle initial is an unmistakably accurate ‘J,’ and the last name is at least a close approximation of the real thing — an L, an E and the faintest beginnings of a W,” according to a June 19 story by Erin McClam, a staff writer for NBC News.

When a new Treasury Secretary comes into office, the BEP requests several samples of his official signature to begin producing new engraved plates used to print an updated series of currency in each denomination.

Lew’s facsimile signature will be used on all new Series 2013 notes.

Lew’s nomination came after former Treasury Secretary Timothy F. Geithner indicated he would be stepping down after Obama began his second term in office.

As Treasury secretary, Lew is responsible for national economic policy.

Rios has direct oversight of the United States Mint, the Bureau of Engraving and Printing, and Fort Knox, all part of the Treasury Department, and is a key liaison with the Federal Reserve. Rios reports to the Treasury secretary through the secretary’s deputy. ¦