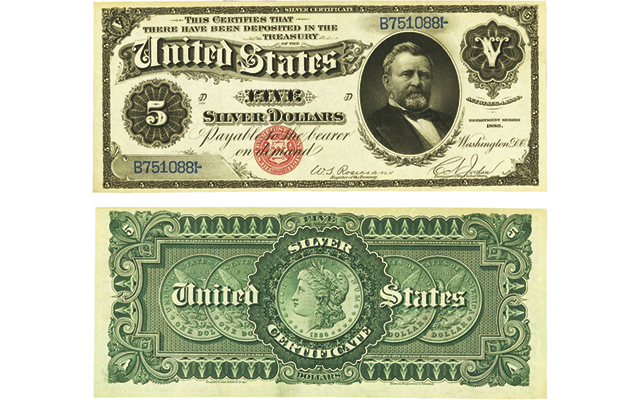 A portrait of Ulysses S. Grant is on the face of this 1886 $5 silver certificate and, on the back, five Morgan silver dollars. The motto "In God We Trust," on the reverse of the coins is the first "appearance" on paper money, decades before it was mandated. 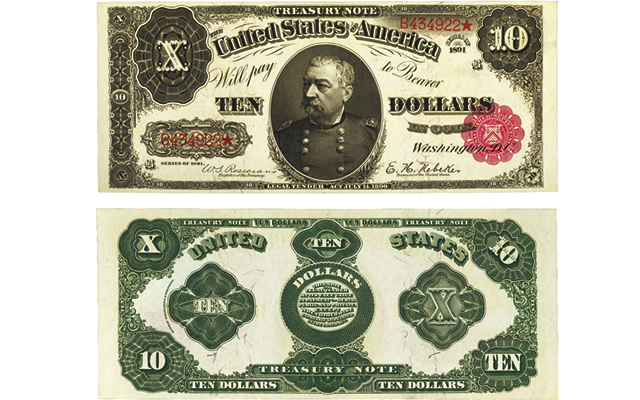 Here’s a look at some of the large-size type notes that can be collected.

Ornate engraving alongside the portrait of Ulysses S. Grant quietly highlights the face design. But the real show stopper might well be in the design on the back, showing five Morgan silver dollars. The reverses of four of the coins are displayed, along with one in the center showing the 1886 obverse design.

One bit of trivia about this note’s design: seen on these notes is the use of the motto “In God We Trust,” on the reverse of the silver dollars. This is the motto’s first appearance on paper notes, decades before it was mandated by government officials in the late 1950s.

The lure of American history fairly shouts from the Series 1891 $10 Treasury or coin note depicting U.S. Army Gen. Philip Sheridan, a graduate of the West Point Military Academy in 1853. Sheridan succeeded Gen. William Tecumseh Sherman in 1884 as commander-in-chief of the Union Army.

The back design shows off the ornate artistry of the guilloche technique of closely spaced lathe-line engravings. The technique produces multitudes of spirals and other repetitive lines that also acted as security devices for the notes. Treasury/coin notes were so-called because they were redeemable in actual coin, but whether silver or gold coin should be paid out was to the discretion of the Treasury secretary.