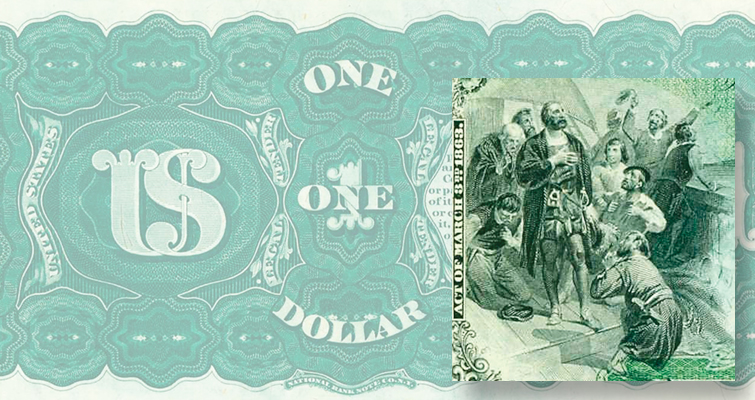 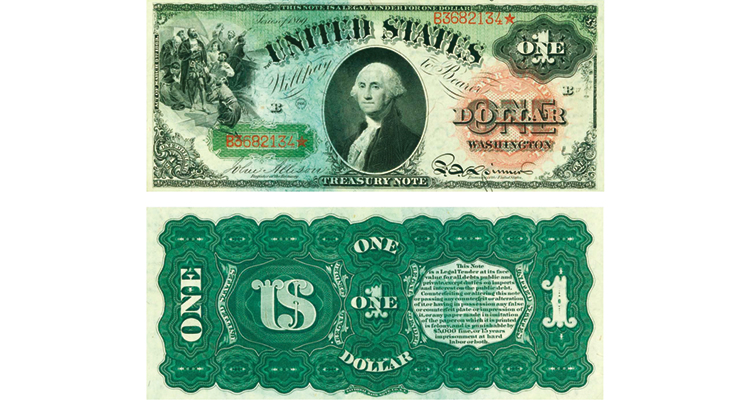 Although the Stack’s Bowers Galleries United States paper money auction at the American Numismatic Association World’s Fair of Money in Rosemont, Ill., has just 269 lots in its floor session, and just 50 percent of them are large-size notes, no fewer than half a dozen rank among the finest known of their issue.

Among the first on the block is the finest known Series 1869 $1 United States note (Friedberg 18) in PCGS Currency Superb Gem New 67 Premium Paper Quality. The legal tender or United States notes of 1869 are known as “Rainbow notes,” for the multihued paper on which they were printed as well as the several different inks used. They are among the most visually attractive large-size issues. The catalog mentions that Superb Gem New Rainbow notes are virtually nonexistent in any denomination and that this example is the only one ever given this grade by PCGS Currency. Its estimated price is $30,000 to $50,000.

The finest known F-155 1880 $50 United States note is graded by Paper Money Guaranty as Choice About Uncirculated 58. When last sold in 2002, this note was assigned a grade of Crisp Uncirculated 60 and brought $28,750. The reason for the insignificant downgrade is that PMG observed some closed pinholes at the bottom right side. It is expected to surpass its last price by far. Only nine are known of this catalog number, with two held by the government.

A relatively common note in uncommon condition is how to best describe the Series 1899 $5 silver certificate (F-281m) estimated at $12,500 to $17,500. This is the “mule” variety of the famous “Indian Chief” note, upon which an old back printing plate was used with the contemporary front plate. PMG gives it a grade of Superb Gem Uncirculated 67 Exceptional Paper Quality, putting it alone at the top of the 10 Uncirculated examples known.

The Series 1891 $50 silver certificate (F-334) in the auction is graded Gem Uncirculated 66 EPQ by PMG, “one of only four that have been graded by PMG at this level, with just one finer,” according to the lot description. All the top-graded notes for this number, with the portrait of Secretary of State Edward Everett, fall within a range of 15 serial numbers from H166201 to H166215. Everett was the featured speaker the day Lincoln gave the Gettysburg Address.

A large-size Blue Seal 1914 $10 Federal Reserve note from the Dallas district also makes the list. This F-947 note is graded by PCGS Currency as Superb Gem New 68 PPQ, making it one of the few notes of this type from any district with such a grade. It is estimated at $20,000 to $30,000.

Finally, the highest “Lazy Deuce” $2 national bank note graded thus far by PMG is a Series 1875 issue from the La Crosse National Bank (Wisconsin), F-391. At Gem Uncirculated 65 EPQ, it has an estimate of $25,000 to $35,000. PMG has assigned this grade to fewer than 10 notes of the type, including all banks and all signature combinations.