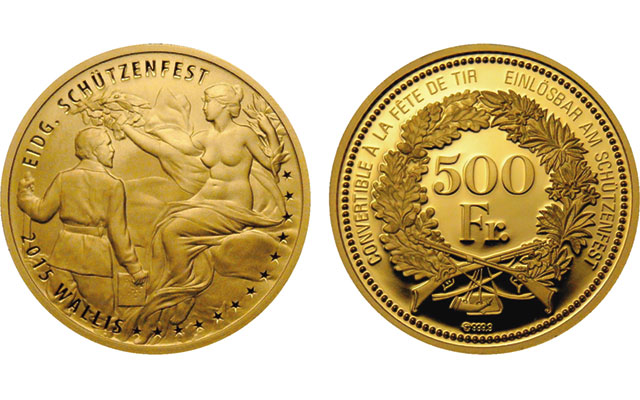 The annual Swiss shooting taler, for the 2015 festival in Valais, is now available from a U.S. distributor. The gold taler is denominated 500 francs. 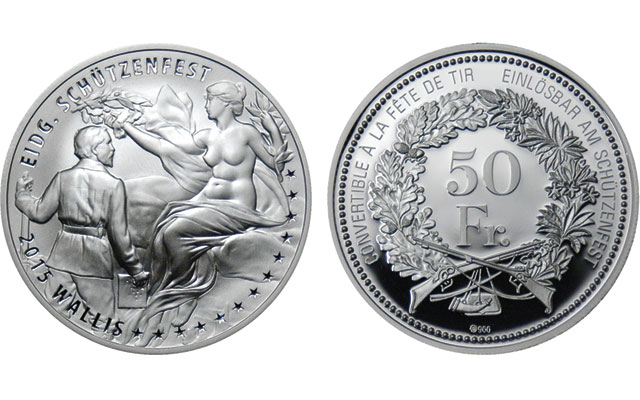 The 2015 Swiss shooting taler is offered in two versions, including the silver 50-franc seen here.

Switzerland’s annual shooting taler is now available from a distributor in the United States.

The Swiss tradition of marksmanship was established during the Old Swiss Confederacy, in the 15th century, when festival participants used crossbows in shooting contests.The legend of William Tell recalls this tradition as well.

The 2015 silver and gold medals (they are not coins) share common obverse and reverse designs, save for the denomination indicated on the reverse.

The obverse shows an allegorical figure that might be interpreted as the Canton of Wallis (Valais) or as Helvetia, the allegorical female personification of the Swiss Republic. She sits naked among billowing drapery, offering an oak and laurel wreath with her right hand and holding a sprig of laurel in her left hand, suggesting she may represent Victory.

On the reverse, the traditional wreath of oak leaves (on the left) and laurel (on the right) surrounds the denomination of 50 francs (silver) or 500 francs (gold). Beneath the wreath, a marksman’s powder horn and bandolier hang from a pair of crossed rifles or muskets.

The legend indicates (in both French and German, two of Switzerland’s four official languages) that the taler is redeemable during the shooting festival, which this year is a federal shooting festival, scheduled to be held in the Swiss Canton of Wallis (Valais in French), home of the Matterhorn.

The Proof .900 fine silver taler medal weighs 25 grams, measures 37 millimeters in diameter and has a mintage limit of 1,200 pieces. It retails for $99.95, with quantity discounts available from the distributor, Talisman Coins.

Medals in 2012 honor festival in Graubunden