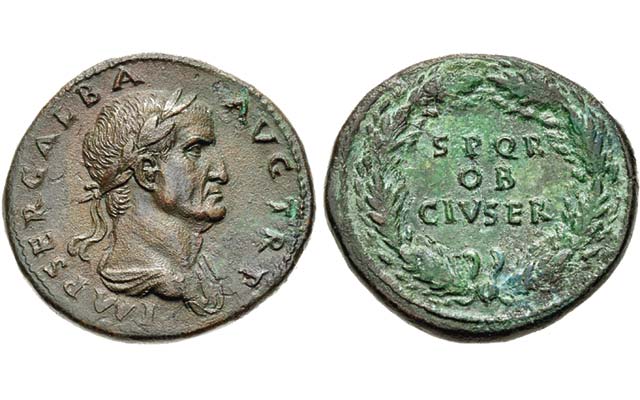 The Emperor Galba (A.D. 68 to 69) wears a crown of laurel leaves on this brass sestertius. This was a common way for Roman emperors to be portrayed on coinage. 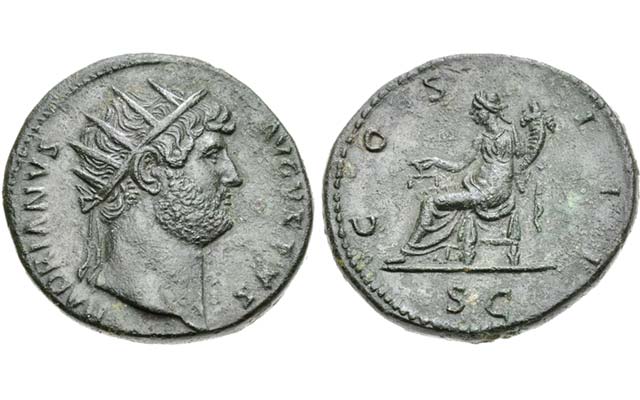 The radiate crown worn by the Emperor Hadrian (A.D. 117 to 138) indicates this coin is a double-denomination — in this case a brass dupondius, worth two copper asses. 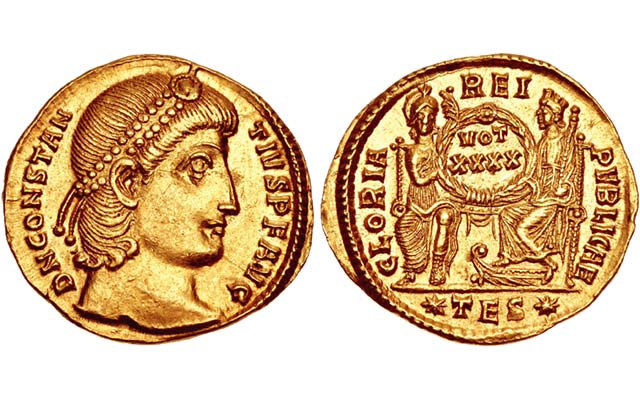 Pearls line the diadem worn by the Emperor Constantius II (A.D. 337 to 361) on this gold solidus. The diadem is tied at the bottom and is ornamented with a medallion at the top. 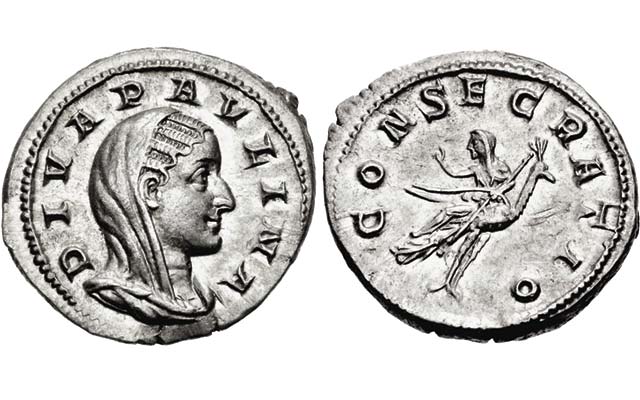 The deified Empress Paulina, wife of the Emperor Maximinus I “Thrax” (A.D. 235 to 238), wears a cloth veil on this silver denarius struck posthumously in her honor. 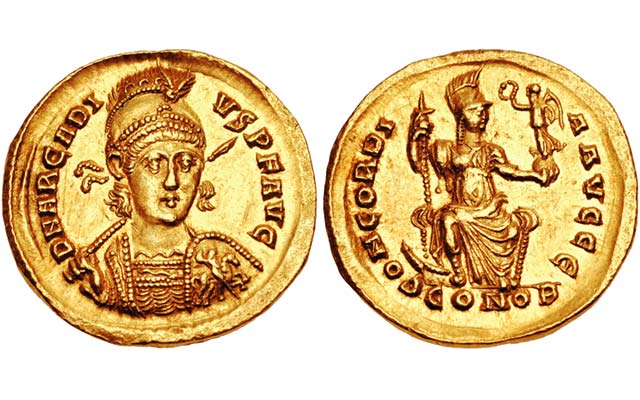 The Emperor Arcadius (A.D. 383 to 408), shown facing, wears an elaborate helmet on this gold solidus. It has a pearl diadem along its base and a horse-hair crest on top.

It has long been recognized that the hallmark of Roman Imperial coinage is the “portrait gallery” it preserves for us to enjoy so long after Roman civilization has fallen. For more than five centuries engravers cut dies that captured the images of emperors, Caesars, empresses and other members of the royal families who ruled the empire.

Though it is most tempting to discuss the portraits themselves, it is equally worthwhile to examine how they were adorned.

We may start with the base-line image, in which the subject wears no kind of head ornamentation at all. This was a common way to portray rulers during the long period spanning the reigns of Augustus (27 B.C. to A.D. 14) to Marcus Aurelius (A.D. 161 to 180).

However, after Marcus Aurelius’ reign, that tradition slipped away. The portraits of emperors afterward rarely show these men bareheaded. This traditional “minimalist” approach came to be reserved mainly for subordinate rulers, usually with the rank of Caesar, as the emperors almost always wear some kind of head ornamentation.

In this installment we’ll discuss the five most common types of head ornamentation on coins of the Roman Empire: laurel wreaths, radiate crowns, diadems, veils, and helmets.

Among the many traditions of the Greeks was the use of wreaths, especially as symbols of victory. The Romans adopted this Greek tradition and applied it to a number of their own cultural mores, including, eventually, as a means of representing the rank of emperor.

During the first 350 years of the empire, this is the most common portrait form for emperors.

The wreath usually comprises laurel branches, though on rare occasions it may be formed of oak leaves, reeds or ivy. It rested comfortably above the ears with its wreath ties hanging at the back of the head.

This distinctive form of crown was made of metal and consisted of a circular headband from which parallel spikes protruded upward in evenly spaced increments. The Greeks had reserved this crown type for divinities or for kings who wished to publicize a special devotion or connection to the gods.

It was especially applicable to the Greek sun-god Helios, and thus also to the Roman version of that god, Sol. Its symbolic value was essentially the same to both the Greeks and the Romans, though on Roman coins its use often had the additional function of earmarking a coin as being a double-denomination.

In its simplest form, the royal diadem, which often is called a stephane in the form worn by women, is an unadorned strip of cloth or metal that wraps around the crown of the head. Just like a laurel wreath or a radiate crown, it often has ties trailing from the back, where two ends were bound.

The plain diadem underwent a significant evolution, which included the addition of a decorative medallion above the forehead. This type of crown was favored by Constantine I “the Great” (A.D. 307 to 337), and soon thereafter became standard.

The plain diadem evolved into one adorned with rows of pearls along its top and bottom edges, usually with a medallion at the forehead.

Soon this evolved into an even more ornate form of diadem, which was composed of large decorative rosettes that were attached to the diadem and interspaced by pearls or pellets. Though this type of diadem may have been used extensively in the palace, it seldom appeared on coins, on which the standard pearl-diadem was by far the most common.

Though it might be presumed that veils were worn only by women in the Roman world, coins and other ancient objects prove otherwise.

The warlords Julius Caesar and Marc Antony, for example, on some silver denarii of 44 B.C. wear veils as a reflection of their holding high priestly offices. On coins of the Roman Empire, however, it is royal women who are most commonly shown wearing veils.

The veil of ancient times looks much like veils of today: a simple piece of cloth that rests on the top of the head and trails down to the shoulders. In the case of Roman portraiture, the face remains exposed, with the veil usually covering just the hair. The veil was used especially on Roman coins that depicted deceased women of the ruling family, but sometimes it also was used for deceased men, notably on issues struck in the early decades of the fourth century A.D.

An essential piece of equipment for Roman soldiers was a helmet.

This practical piece of headgear was worn not only by common soldiers, but also by their commanders, some of whom were heads of state. The helmets of the latter, to be sure, were of a higher caliber, including what commonly is known as a parade helmet — richly ornamented but not necessarily intended for use in battle.

During the early centuries of the Roman Empire it is highly unusual for a coin to portray an emperor wearing a helmet. However, from the 260s A.D. onward, it becomes increasingly common. A century later it was one of the standard ways the emperor’s image was adorned.

The helmets shown on coinage vary greatly, but most have crests and ornamented surfaces. Quite often a laurel wreath, a radiate crown or diadem is fitted over the helmet so as to make sure those emblems of emperorship are clearly visible.

We might take this chance to note that on rare occasions, unusual head adornments appeared on Roman coins.

For example, the general Marcus Agrippa, one of the heirs of the Emperor Augustus, sometimes wears a corona muralis (a crown modeled after the battlements and towers of a city wall) or a corona navalis (a crown comprised of overlapping prows of war galleys).

Most incredible of all, however, was a lion’s scalp, which the Emperor Commodus (A.D. 177 to 192) wears on some coins struck late in his reign. It portrays his special association with the Greco-Roman hero Hercules (Heracles). Though Commodus’ use stands out, some other emperors also used it, notably Maximian (A.D. 286 to 305 or 310).