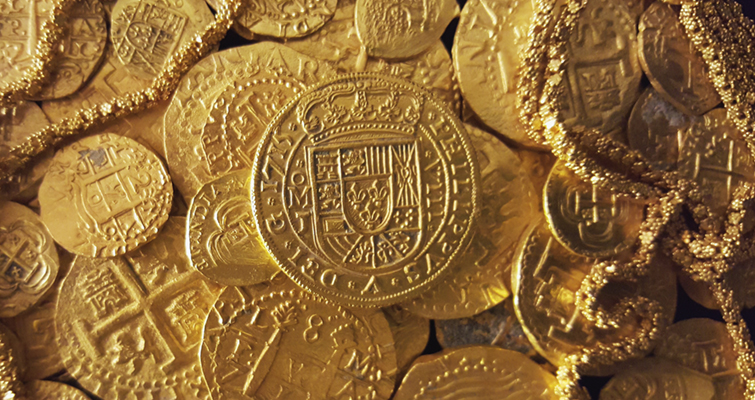 Fifty-one coins and 40 feet of gold chain from the site of the 1715 Treasure Fleet wreck off the coast of Florida were discovered in June. 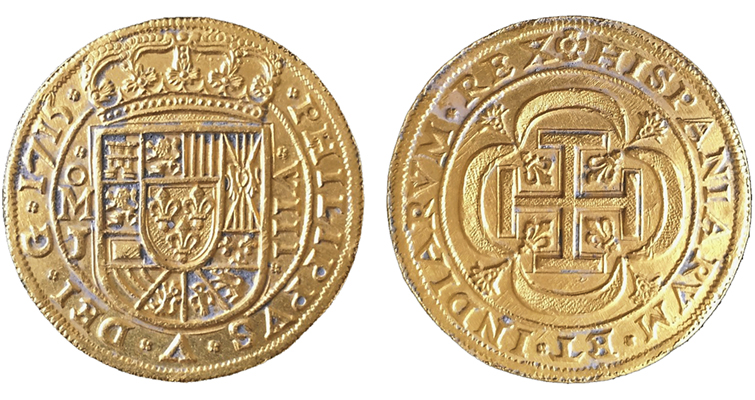 The most notable coin in the latest 1715 Treasure Fleet find is what the finders term the “Tricentennial Royal,” a 1715 8-escudo coin meant to serve as a celebratory piece for the king of Spain or another member of the royal family. 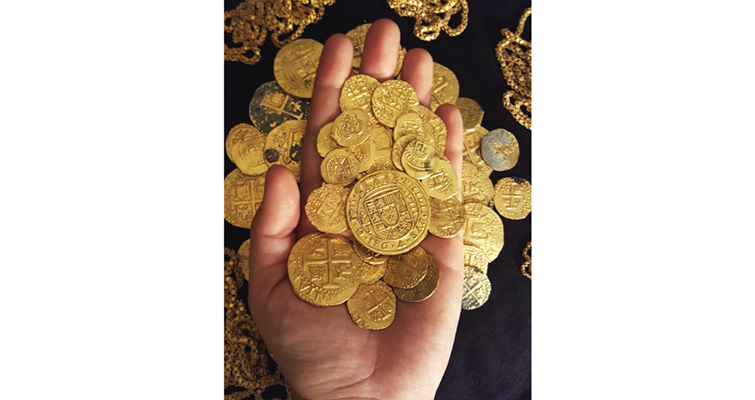 The recovery was made by the Schmitt family, who are subcontractors of Queens Jewels LLC, the owner of the 1715 Treasure Fleet wreck’s salvage rights.

More than 50 gold coins and 40 feet of gold chain have been pulled up from the site of the 1715 Treasure Fleet shipwrecks off the coast of Florida.

The items were located by the treasure-hunting Schmitt family on June 17 in 15-foot-deep waters approximately 1,000 feet from the beaches of Fort Pierce, Fla., which is about 30 miles north of West Palm Beach. In all, 51 gold coins were recovered: 17 8-escudo coins, 22 2-escudo coins, and 12 1-escudo coins.

One of the 8-escudo coins is particularly notable. Known as a “Royal,” the gold coin was specifically made for the king of Spain at the time, Phillip V. Brent Brisben, who owns the company that holds the salvage rights to the 1715 Treasure Fleet, Queens Jewels LLC, said the coin would have served as a celebratory piece for the king or another member of the royal family.

A Queens Jewels release states that the Royal is a “perfect specimen of the coinage of the period” and is one of only a handful of Royals that were aboard the ships of the 1715 Treasure Fleet. It is dated 1715, and is being referred to as the “Tricentennial Royal.”

Brisben said it’s the most notable find during the five years his company has held the salvage rights, mainly due to the Royal, calling it “the most amazing find in my tenure.”

The Schmitt family are subcontractors for Queens Jewels. Brisben’s company offers individuals and groups of treasure-hunters the opportunity to search the waters where the 1715 Treasure Fleet wrecked. Once the state of Florida takes the 20 percent of the artifacts it is entitled to, Queens Jewels and the Schmitt family will each take half of the remaining 80 percent of the recovery.

“These finds are important not just for their monetary value, but their historical importance,” Brisben said. “One of our key goals is to help learn from and preserve history, and this week’s finds draw us closer to those truths.”

The 1715 Treasure Fleet was a group of 12 treasure-carrying Spanish galleons bound from Havana to Spain, where the gold they contained would be used to support the Spanish crown, which was on the brink of bankruptcy, according to Queens Jewels LLC’s website. On July 30, 1715, a hurricane wrecked 11 of the 12 ships off the coast of Florida, as they were heading up the Bahama Channel.

While much of the treasure was recovered soon after the wrecks, Brisben said he believes that more than $400 million worth of gold remains unrecovered.