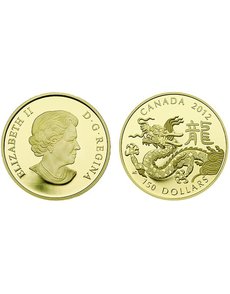 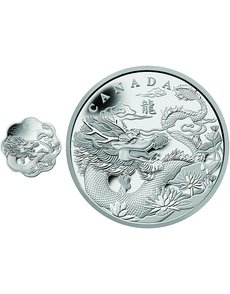 Another design marking the Year of the Dragon appears on three coins, including a scallop-shaped Proof silver $15 coin, and, new for the RCM’s annual program, kilogram-sized coins; the Proof silver $250 version appears.

When the Royal Canadian Mint on Sept. 1 launched Year of the Dragon coins, collectors may have noticed something besides an annual change in designs: mintage limits for certain coins in the RCM’s ongoing Lunar calendar program have been increased over previous years.

In addition, Canada’s celebration of the Chinese zodiac calendar on coinage expanded to more and bigger coins than in previous issues.

Five 2012-dated coins are issued in several sub-series of the broad Lunar calendar theme: a silver $15 coin and gold $150 coin are part of the continuing Classic Chinese Zodiac series, and another silver $15 coin that is scalloped or lotus shaped continues a separate Lunar Lotus sub-series. Additionally, the RCM for the first time is issuing kilogram-sized silver and gold Lunar coins, increasing the total number of coins with a Lunar theme to five, compared to four in 2011. The two 2012 kilo coins bear the same reverse design as used on the Lunar Lotus $15 coin, though the kilo coins are round and are not listed as part of the Lunar Lotus series. (The 2011 Lunar coin program offered a hologram gold $150 coin in a sub-series that ended with the 2011 release and is not part of the 2012 program, plus a Lunar Lotus $15 coin and $15 and $150 coins in the “classic” segment.)

Both silver $15 coins have higher mintage limits than their counterparts in 2011.

According to Alex Reeves, the RCM’s senior manager of communications, the RCM increased mintages because “we regularly adjust mintages to meet the needs of the market and in this case, our Chinese Lunar Calendar year products are increasingly popular in Canada and world-wide for their superior quality and visual appeal.”

Year of the Dragon

Twelve animals form the Chinese zodiac calendar. One animal corresponds with each year in a 12-year cycle, the new year beginning sometime in January or February every year.

People born during each year are ascribed to have certain characteristics and qualities; those born in a Year of the Dragon are said to be “healthy, energetic, excitable, short-tempered, and stubborn,” according to the Chinese Cultural Center of San Francisco. “They are also honest, sensitive, brave, and they inspire confidence and trust.”

All of the coins are dated 2012 and feature the Susanna Blunt effigy of Queen Elizabeth II on the obverse.

The two coins in Classic Chinese Zodiac series feature a design by Aries Chung that shows “a classic Asian interpretation of the mythical Dragon, complete with auspicious clouds of good fortune,” according to the RCM. Each of the two coins is the third installment of its denomination, in an annual series that began with the 2010 Year of the Tiger coin.

The Aries Chung design appears on the reverse of a Proof .9999 fine silver $15 coin, as well as a Proof .750 fine gold, .250 fine silver $150 coin. The two coins’ designs differ only in the denomination designation.

The silver coin weighs 31.39 grams, measures 38 millimeters in diameter and has a mintage limit of 48,888 coins. The mintage reflects a spike from previous mintage levels, which had been at 9,999 pieces each year from the beginning of the series. The coin retails for $98.88.

The Proof Lunar Lotus .999 fine silver $15 coin is scallop-shaped, with eight scallops. It shows a right-facing, stylized dragon, surrounded by lotus flowers and dark thunderclouds, which according to Chinese legend are an omen of prosperity and often associated with dragons, the RCM states. The dragon’s serpentine shape echoes the scalloped edge of the coin.

What is essentially the same design as used on the Lunar Lotus $15 coin also appears on Proof .9999 fine silver and .9999 fine gold kilogram-sized versions, denominated $250 (silver) and $2,500 (gold), both round in shape. These coins are additions to the annual program and are not designated as being in the Lunar Lotus segment.

The common design, created by Three Degrees Creative Group Inc., is fully realized on the round kilo coins, a slightly larger canvas than the wavy scalloped edges permit on the $15 coin with the same basic design.

These are the first kilogram-sized Lunar zodiac coins from the RCM; both coins measure 101.6 millimeters in diameter. The silver coin has a mintage limit of 5,888 coins and is priced at $2,195.95. The gold coin is limited to a mintage of 38 pieces and carries a retail price of $69,000.

Although the gold kilogram coin won’t be delivered until Jan. 3, the coin has already achieved sellout status, according to the RCM.

“In addition to being satisfactory to the 38 customers for this product, this delivery date benefits our increasingly busy production schedule,” Reeves said.