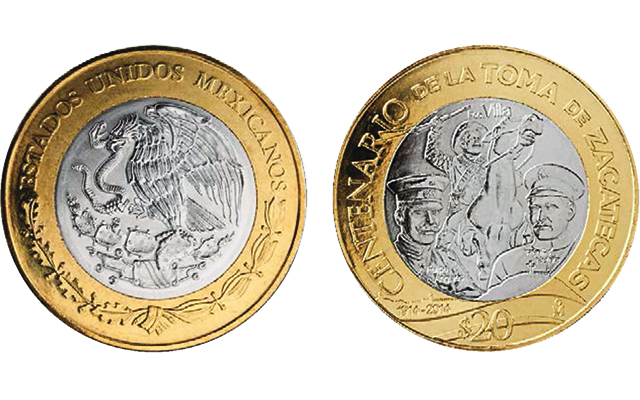 A new circulating commemorative 20-peso coin from Mexico marks the centennial of the Taking of Zacatecas, the bloodiest battle in the Mexican Revolution.

Also known as the Battle of Zacatecas, the fight on June 23, 1914, was between Pancho Villa, with his Division of the North, and national forces representing Mexican President Victoriano Huerta.

It was the bloodiest battle in the Mexican Revolution, leaving 7,000 soldiers dead and 5,000 wounded. Villa claimed a decisive victory, and Huerta resigned about one month later.

The ringed-bimetallic coin was released Sept. 5.

The reverse shows several figures central to the winning side, including Villa at the center of the design. On Villa’s left is Felipe Ángeles Ramirez, who served under Villa and helped lead the attack, and Gen. Panfilo Natera García is to Villa’s right. Natera was appointed governor of Zacatecas after the victory.

The coin has a copper-nickel core and aluminum-bronze ring, weighs 15.945 grams, and measures 32 millimeters in diameter.

The mintage limit has not been announced.

Collectors will have to search the secondary market to obtain the coin.