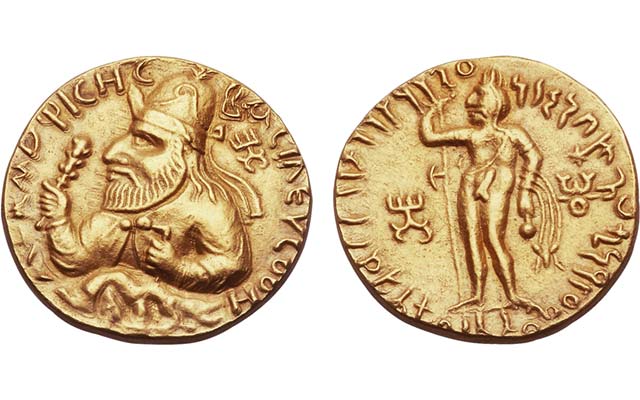 In contrast to Greek, Roman, and Byzantine coins, the various coins of India’s Kushan Empire are not in the mainstream with U.S. collectors. That is a shame, because this represents a fascinating collecting area with expressive and interesting designs, and many different gold types available at less than $1,000.

This gold dinar was issued by Vima Kadphises circa A.D. 100 to 127 or 128. It features a virile bust of the issuer, arising from the clouds. The reverse depicts the Hindu god Siva (more specifically an Ithyphallic Siva) standing, facing the viewer with his head turned left, holding a trident and a he-goat skin. Heritage notes that it is well centered and sharply struck, grading it Extremely Fine. It sold for $3,525, below its estimate of $4,500 to $6,000.