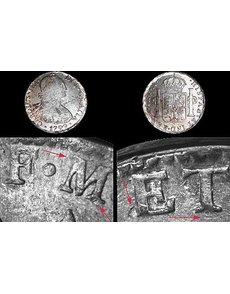 Depressions, shown by arrows, appear on the counterfeit 1799 8-real coin on the M of the designer’s initials FM, and about ET from the reverse inscription.

Many of these fakes were struck from hand-cut dies, where the person producing the fake dies was using a photograph of a genuine coin as a model. This type of counterfeit is usually fairly easy to identify, especially if a collector has a genuine coin to compare to the suspect piece. Differences in the style of date digits or lettering are usually the first things to check.

The counterfeit shown here is a step up in counterfeit quality. A genuine 1799 8-real coin was used as a model coin when the fake dies were produced, so all the details of the coin are accurate. It appears that the model coin was either a “ground find” or a “sea salvage” coin, and the roughness from corrosion and etching on the genuine coin transferred over to the fake.

While a counterfeit coin struck from transfer dies is typically a much more deceptive fake, the transfer die process has its own set of problems. Any defects on the surface of the genuine model coin, such as contact marks, scratches, digs and dents, will faithfully transfer over to the fake dies. Every fake coin struck from these dies will then exhibit identical marks, referred to as “depressions” by authenticators.

ANACS has a huge file of these counterfeit markers that we use to identify counterfeit coins. Since it is virtually impossible for two genuine coins to display identical contact marks and scratches, depressions are an excellent diagnostic.

Even though these depressions make authentication easy, this fake is definitely better than most. The weight is accurate, the edge design is correct and the overall appearance is identical to a genuine coin that has been in the ground or the ocean.