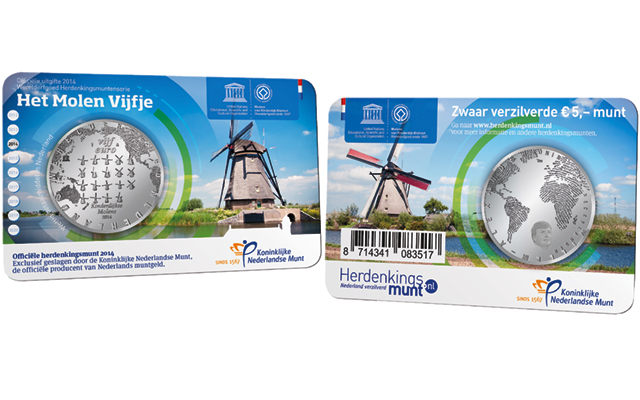 The Royal Dutch Mint is issuing a silver-plated copper €5 coin as part of its series honoring the windmills of Kinderdijk. A Brilliant Uncirculated version is sold on a colorful coin card, as shown here. 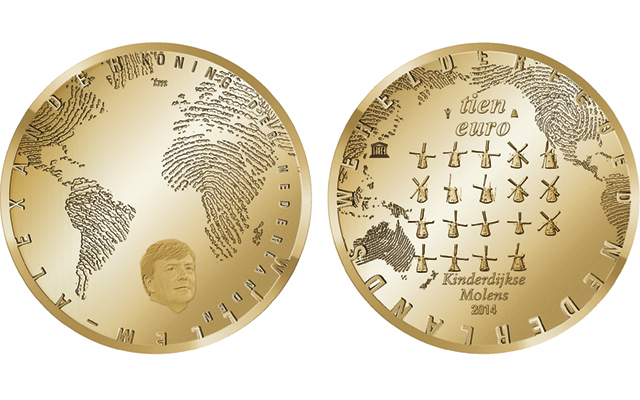 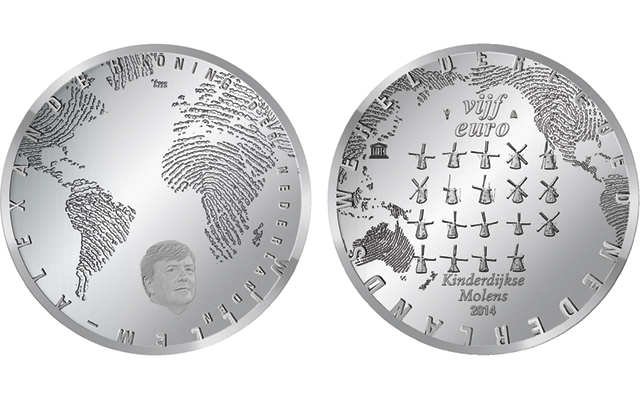 A Proof silver €10 coin is part of the Royal Dutch Mint's series honoring the windmills of Kinderdijk. 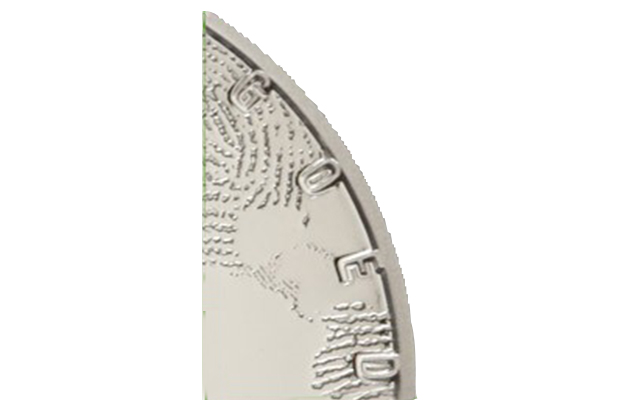 Engineers at the Royal Dutch Mint developed a technique to place the letters of inscriptions and legends as close as possible to the rim of the coin, as seen here in a close-up image.

Windmills are characteristic of the Dutch landscape and a symbol of the Dutch people’s struggle to contain water.

The Royal Dutch Mint on Sept. 25 will hold a ceremonial coin launch for 2014 coins honoring the windmills of Kinderdijk.

Earlier issues in this series were the Amsterdam Canal District coins (in 2012) and the Rietveld coins (2013). All three coin designs released in this series so far have been designed by Tina Melzer.

The obverse of the 2014 coins shows a stylized portrait of King Willem-Alexander on a world map composed from fingerprints. “This symbolizes how Dutch World Heritage is communal property and is a global symbol for Dutch culture,” according to the Royal Dutch Mint.

The map is continued on the reverse, which gives the coins the semblance of a globe. A total of 19 different mills of Kinderdijk and the UNESCO logo complete the scene on the 2014 coins.

According to Sander Knol, product manager at the Royal Dutch Mint, the new coin also marks the development of new engraving technology.

Knol said that many of the letters in the legends and inscriptions on these coins are positioned into the outer rim.

“You can see the letters are positioned descending and are underneath the [character]. The letters are attached to the edge,” he wrote, in an email.

Engravers at the Royal Dutch Mint used a special technique to add this to the die.

“We design the model in a digital program and with this program we can create these type of complex shapes and judge if we can make them work on a coin ... before we make [a] sample die,” Knol wrote. “The sample dies ... are engraved by laser and this allows us to make tests within acceptable times and see if it works. And ultimately in this case it did.”

The silver-plated copper €5 coin weighs 10.5 grams, measures 29 millimeters in diameter and has an overall mintage limit of 250,000 pieces. In total, 15,000 Brilliant Uncirculated examples are being offered in a colorful plastic coin card, with 20-coin rolls in Uncirculated condition also available.

Coin & Currency Institute offers the silver coin at $62.50 and the gold coin for $489. The distributor does not offer the silver-plated copper options. Each order from the distributor should include $5.75 for shipping and handling, and Vermont residents must add 6 percent sales tax.