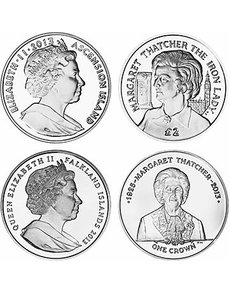 Margaret Thatcher is being honored with new coins from the Pobjoy Mint. A coin in the name of Ascension Island, top, shows her with the House of Parliament and No. 10 Downing Street in the background. A more recent image of Thatcher appears on the coin from Falkland Islands, bottom.

The “Iron Lady” is now available in silver.

Baroness Margaret Thatcher, who died April 8, is being honored on collectible coins issued by Ascension Island and the Falkland Islands.

The Pobjoy Mint, a private mint in England, is releasing coins in Uncirculated copper-nickel and Proof .925 fine silver versions on behalf of the two nations. The Ascension Island coins are denominated £2, with the Falkland Islands coins denominated one crown. Each nation’s coin has a distinctive commemorative reverse honoring Thatcher.

In 1979, Thatcher became Britain’s first and only female prime minister; she would become the longest serving prime minister of the 20th century. She was accorded a ceremonial funeral with full military honors at St. Paul’s Cathedral, the only politician granted such a tribute since the death of Winston Churchill in 1965.

Thatcher was described by current British Prime Minister David Cameron as “a great leader, a great Prime Minister, and a great Briton.”

A notable military event during Thatcher’s ministerial service has ties to one of the issuing countries of these new coins. In 1982, Argentina invaded the Falkland Islands, and Thatcher dispatched a task force to drive those invading forces off the islands.

The dispute has been the subject of Argentinean coins also, including a 2007 commemorative marking the 25th anniversary of the battle for the islands. Argentina continues to claim the islands, which they refer to as the Malvinas.

The Falkland Islands coins show a recent portrait of Thatcher, while the design on the Ascension Island coin features Baroness Thatcher with the Houses of Parliament and No. 10 Downing Street (prime minister’s office) in the background.

The obverse of each coin carries an effigy of Queen Elizabeth II by Ian Rank-Broadley.

The coins weigh 28.28 grams and measure 38.6 millimeters in diameter. The Uncirculated coins have an unlimited mintage and cost $16.95 each, with the silver coins limited to mintage of 10,000 per design and costing $89 each.