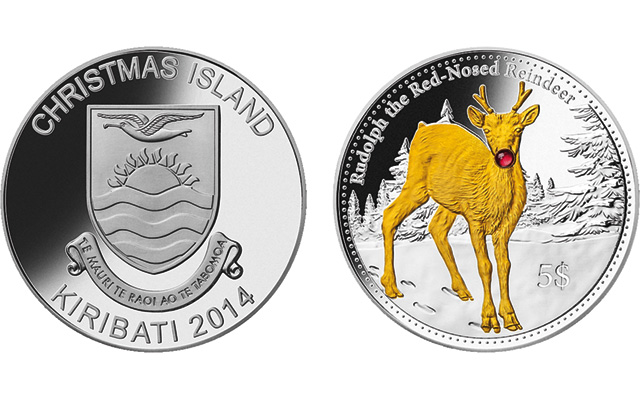 Thanks to a red ruby, Rudolph's nose shines brightly on a Proof .925 fine silver $5 coin from Kiribati, home of the Christmas Island. 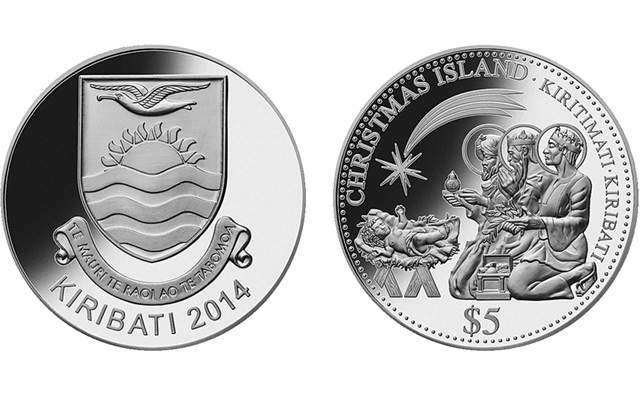 A message of faith appears on the other Proof silver $5 coin in the series, showing the Three Kings presenting gifts to the newborn Christ child. 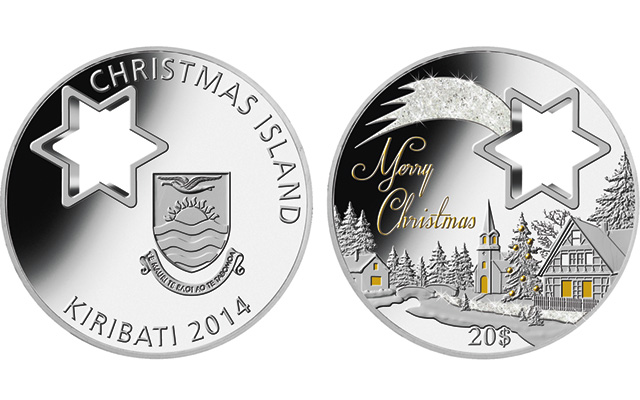 The Christmas Star streaking across the wintry sky is actually a star-shaped hole in the planchet. Gold color and diamond dust accent the rest of the scene on the 2-ounce silver $20 coin.

The issuer of three new Christmas coins is, appropriately enough, a tiny nation that includes an island sometimes known as Christmas Island.

The island nation Republic of Kiribati includes an island called Kiritimati, whose name is from the English word “Christmas," and pronounced very similarly, although respelled in the style of the native Kiribati language in which the -ti is pronounced as an s.

The three new coins highlight popular themes for Christmas and the winter season.

Two of the coins are highlighted with different technology. Rudolph’s red nose glows, thanks to a red ruby, which stands out against his golden-colored coat.

The Christmas Star coin is highlighted by the star-shaped cutout from the coin, which is a major portion of the reverse design, a blazing star above an idyllic winter village scene. Gold color and diamond dust accent the wintry scene.

The obverse of each coin carries the coat of arms of Kiribati, the nation’s names (Kiribati and Christmas Islands) and the 2014 year date.

The $20 Christmas Star coin weighs 62.2 grams, measures 55 millimeters in diameter and is limited to a mintage of 999 pieces.

The coins were released at the direction of German coin firm MDM Münzhandelsgesellschaft mbh & Co. KG.

American Precious Metals Exchange is the distributor for the coins in the United States.