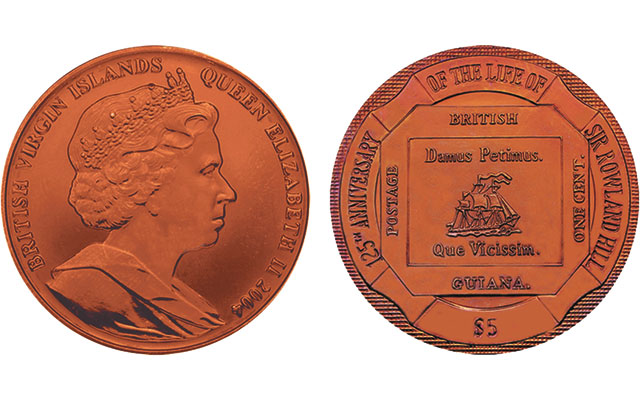 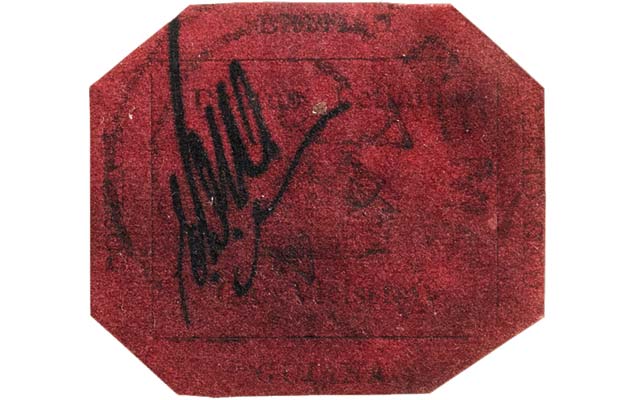 The Penny Magenta stamp is the world’s most expensive postage stamp, having sold for $9.48 million in a 2014 auction by Sotheby’s.

Editor's note: The following is the third of a multi-part Coin World series about the intersection of coins and postage stamps prepared by Jeff Starck for the May 2015 monthly edition of Coin World.

The Pobjoy Mint’s colorful celebration of colorfully named stamps continued in 2004, with the issuance of the first red-colored coins using colored titanium, for the British Virgin Islands.

The coins fittingly depict the 1-cent, magenta-colored stamp issued by British Guiana in 1856, a stamp currently among the rarest and most valuable in that collecting field.

The “Penny Magenta,” though, might also qualify as one of the world’s ugliest. The unique surviving example of the rectangular stamp had its corners clipped, making the stamp octagonal. Black cancellation markings obscure much of the stamp’s underlying scene, a ship.

The stamp was discovered in 1873 by a Scottish schoolboy, L. Vernon Vaughan, living in British Guiana. He did not realize the stamp’s rarity and sold it for a modest $1.50, according to Linn’s Philatelic Gems. The stamp eventually wound up in famous collections and most recently was sold by Sotheby’s in 2014 for $9.48 million.

The Penny Magenta coin also commemorates the 125th anniversary of the death of Sir Rowland Hill, the father of the postal system.

The $5 coin currently trades for about $35 to $65 U.S. No recent auction records for the gold coin could be determined; the “spot” or precious metal value of the gold alone is $347 at press time.