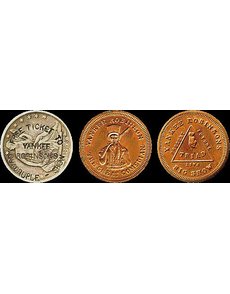 Yankee Robinson is one of my favorite numismatic characters. I first “met” him in the late 1950s when as a teenager I became fascinated with Civil War tokens.

One curious example, worth perhaps a dollar then ($20 to $40 for an Extremely Fine example now) showed a man wearing a stovepipe hat and carrying a gun, with the inscription, YANKEE ROBINSON / THE GREAT SHOWMAN.

The reverse proclaimed YANKEE ROBINSON’S BIG SHOW and had a finger pointing to “Triad,” a triangle with PRESENT, FUTURE and PAST around the triangle’s edges.

A fan of circuses, I knew of Ringling Brothers, Barnum & Bailey, of course, and had seen them under canvas on a couple of occasions.

But Yankee Robinson? Who was he?

In the 1990s I determined to learn more about him. I read through old copies of the New York Clipper trade magazine, found some advertisements in 19th century papers, and made a fortunate contact with Fred Dahlinger, historian at the Circus World Museum in Baraboo, Wis.

It turned out that the museum had a large file of articles on the “great comedian” and his show. When I wrote More Adventures with Rare Coins in 2002, I included a large chapter on Yankee.

Fayette Lodawick Robinson was born on May 2, 1818, near Avon Mineral Spring in Livingston County, New York. While a teenaged student in his native town, he made his first stage appearance in a school play, essaying the role of Jonathan Doolittle in A Yankee in England.

This may have inspired his nickname. He went on to live his life on the stage and under the circus tent, in the 1850s and 1860s achieving great fame amid making money one year and losing it in the next.

His life is a fascinating chronicle, what with Madame Sanyeah, the rare wallapus, a mile-long parade, and more — material for a book perhaps.

Numismatists today can collect more than a dozen varieties of his Civil War tokens. In addition, in 1854 and 1855 he counterstamped many thousands (probably) of half dollars with FREE TICKET TO / YANKEE / ROBINSONS / QUADRUPLE SHOW.

Anyone getting one of the coins in change of course had a “free ticket,” but the half dollar had to be left behind at the show entrance!