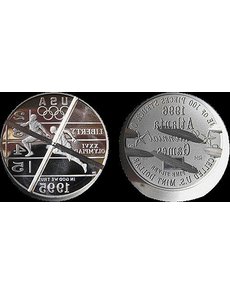 U.S. Mint X-canceled Olympic Proof dollar die, left, was paired, by a private minter in Utah, with a commemorative reverse (at right above, after being canceled) to produce prooflike medals. Both dies were sold in separate eBay auctions.

All images courtesy of Regency Mint. 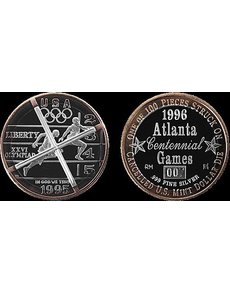 All images courtesy of Regency Mint. U.S. Mint X-canceled Olympic Proof dollar die, left, was paired, by a private minter in Utah, with a commemorative reverse (at right above, after being canceled) to produce prooflike medals. Both dies were sold in separate eBay auctions.

All images courtesy of Regency Mint.

A settlement has been reached between the United States Olympic Committee and a private minter who was producing and selling commemorative medals struck with a U.S. Mint-canceled Proof 1995-P Atlanta Centennial Olympics silver dollar die.

At the center of the issue is the U.S. Olympics logo, present under license on the obverse die but whose commercial use is permitted only through a license granted by the USOC.

The settlement does not prohibit private ownership of the medals.

The canceled Track and Field obverse die used for the medals’ common obverse includes in its design the trademarked U.S. Olympics logo featuring the letters USA over the five Olympic rings. The USOC had granted the U.S. Mint the right to use the Olympic logo on the Olympic coinage, but had not granted the right to the private minter that used the canceled die in striking medals.

The rings motif was adopted by the International Olympic Committee in 1912.

Also not disclosed was the date when Finnegan was purportedly informed by USOC officials about alleged trademark infringement.

Mark Jones, USOC’s senior director of communications in Colorado Springs, Colo., said via email Dec. 2 that the USOC objected to the production of the medals bearing the Olympic rings “because we view any items bearing Olympic trademarks as ‘Olympic merchandise,’ which must be authorized and licensed by the USOC.”

“We would not object to collectors purchasing the die itself to keep in a personal collection, but they would not be able to create and sell new Olympic merchandise without the USOC’s express consent,” according to Jones.

“Our communications with QSB [Quality Silver Bullion] are confidential, but we have reached an agreeable settlement and thank QSB for their cooperation.”

The original U.S. Mint-canceled Olympic die that Finnegan used for the common obverse of his medals was sold in an eBay sale that closed Nov. 24 for $850.01.

Finnegan said via email Dec. 2 that he was unable to disclose specific details of the settlement reached with the USOC.

Finnegan told Coin World Sept. 24 that he had wanted for some time to produce a commemorative medal using one of the 2,833 X-canceled Olympic commemorative coin dies sold by the U.S. Mint in 1997. He had recently become able to fulfill that goal, having acquired a suitable example in an eBay auction (see Oct. 14 Coin World).

Finnegan said in September that he did not anticipate any legal problems with the production and sale of the medals, since the die was canceled and sold by the U.S. Mint, and the medals were not being issued as official U.S. government issues and did not purport to have any redeemable value in U.S. currency.

Potential legal problems with the unauthorized use of the Olympic logo were not discussed in the September interview with Coin World.

After the article about the medals was published in the Oct. 14 Coin World, one reader, Indiana collector Joseph E. Boling, in a Letter to the Editor published in the Oct. 28 issue, expressed his doubts that the U.S. Mint could have transferred its license with the USOC to Quality Silver Bullion to use the Olympic rings logo.

After receipt of Boling’s letter, Coin World contacted Finnegan and officials from the IOC, the U.S. Mint and USOC.

The IOC stated that the matter was one for the USOC to address.

Finnegan immediately responded he did not believe there was a legal issue with the medals’ production.

U.S. Mint spokesman Michael White said by email Oct. 9 that the Mint, at that time, was unaware of any substantive evidence to indicate that the questioned medallions raise any legal or consumer protection concerns.

The canceled U.S. Mint die Finnegan employed to strike the common obverse of his commemorative medals was one of 220 Proof 1995-P dies bearing the Track and Field obverse design that the Mint sold to the public.

The U.S. Mint offered 2,833 canceled dies in its 1997 Holiday Catalog, for $49 each. The offering comprised obverse and reverse dies used to strike gold $5 half eagles and silver dollars for the 1995-1996 Atlanta Centennial Olympics Coin Program.

In September 2013, Finnegan began offering three-piece medal sets both on eBay and on the QualitySilverBullion.com website.

Quality Silver Bullion is a subsidiary of Regency Mint in Orem, Utah, where Finnegan is an employee.

Finnegan’s plan was to have 100 three-piece medal sets struck, with each medal in each set bearing matching serial numbers on the edge.

Most of the sets that Finnegan sold, before being contacted by USOC officials, were purchased for a little more than $100 per set.

Once all the sets numbered 002 through 100 were sold, the canceled obverse and reverse dies and the three-medal set with each medal numbered 001 were to be sold.

The common medal reverse, canceled after medal production was discontinued, sold in a separate eBay auction Nov. 24 for $415.01.

The medals have a prooflike finish. ¦