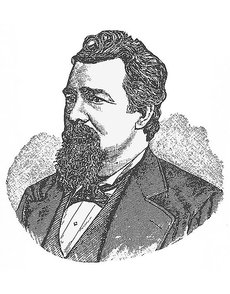 Ebenezer Locke Mason as depicted in the November 1884 issue of Coin Collectors’ Magazine.

Old coin auction catalogs are a joy to read. Most fun of all is how 19th century coin dealers used their catalogs as blunt instruments to bludgeon their competitors. Today, libelous statements would land the writer in court, but in the 1800s, the victim would just hit back in his next catalog.

The heavyweight champion of 19th century name-calling was Ebenezer Locke Mason, an early coin dealer in — ironically enough — the City of Brotherly Love, Philadelphia. Here is some vintage Ebenezer, accusing fellow Pennsylvanian Charles Steigerwalt of plagiarism: “Down on your marrow bones, Stigey, and beg forgiveness; or pay us for … your cool impudence in filching our brains, and denying the fact.”

Old Eb was uncharitable about every error made by colleagues. Take, for example, his contempt for New York’s David Proskey, for his “… ignorance in asserting in positive terms that the ‘1838 half dollar, O Mint, is a pattern piece.’ ”

Mason’s targets suffered, but rarely in silence. Edward Cogan, the self-styled “Father of the Coin Trade” in America, was publicly critical of Mason’s grading in the latter’s J. Colvin Randall auction of Oct. 28 to 29, 1868. Eb returned fire, prompting Cogan to publish an open letter in which he called Mason’s response “contemptible, unintelligible, untruthful twaddle.”

Cogan was the silverback male among coin dealers, and Mason prudently decided that he had nothing to gain from an “Ed versus Eb” feud, so he chose not to reply.

None of Mason’s opponents counterpunched as hard as Charles Chaplin, a mouthpiece for Boston’s Trifet Company. Writing in Trifet’s American Stamp Mercury and Numismatist, Chaplin dissed and dismissed Ebenezer as “amusingly stupid,” and most memorably, as “one of the high-pressure kind of human gas bags.” This sly allusion to Mason’s service in the Army of the Potomac’s Balloon Corps surely evoked the vision of him as a giant bladder of hot air. Chaplin was unkind, but not inaccurate, for Eb was an odd duck. He chronicled his strange doings in a series of numismatic magazines that he published throughout his career, along with ads for coins and airings of his current grudges. My favorite is the tale of his journeying to Boston in December 1871, dropping in, unannounced — on Christmas morning! — at the homes of flabbergasted numismatists like author S.S. Crosby and dealer W. Elliot Woodward. Eb complained that Woodward was “too busy with family presents to devote any time to coin matters”!

If you’d enjoy reading Mason’s ramblings and slanderings, you are in luck. Numismatic booksellers frequently offer, at reasonable prices, copies of the 34 catalogs Mason produced during his 30-year numismatic career. Issues of the six different coin magazines that Mason published are rarer, and therefore pricier, but happily, the numismatic bookseller Charles Davis has reprinted them all, in two volumes, again reasonably priced. So it really is easy to see if Mason won or lost more verbal jousts with his fellow coin dealers. Whether you find old Eb amusing, or just “amusingly stupid,” you will be fascinated by all of the “flying feathers” these publications contain.