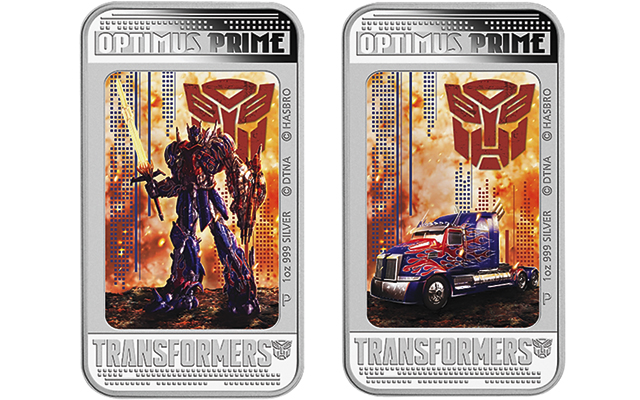 Transformers are the subject of three new coins from the Perth Mint for Tuvalu. Lenticular technology shows Optimus Prime, the leader of the Autobots, transform from robot to a Western Star truck on the Proof silver $1 coin. 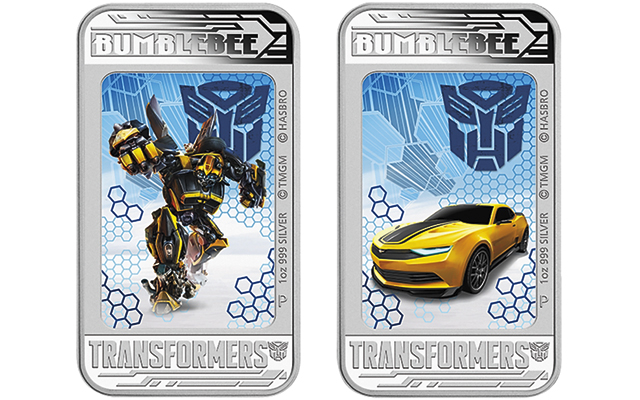 The Transformers characters come to the silver screen this year in Transformers: Age of Extinction. On the reverse of this coin, Bumblebee transforms from an Autobot into a “sexy” modern Chevrolet Camaro. 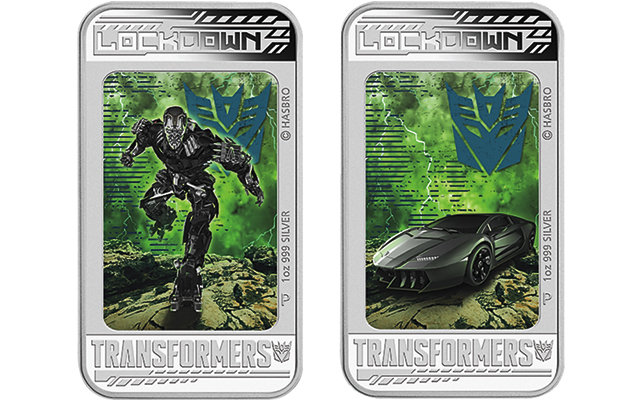 Lockdown, a rogue Transformer who becomes a Decepticon, is back for vengeance in the new movie. The character shifts from a robot into a Lockdown vehicle in action on the reverse of the coin.

Transformers: Age of Extinction is coming soon to the silver screen, but the wait for silver coins is over.

The Perth Mint on June 3 (June 2 in North America) released a trio of Proof .999 fine silver dollars showing the characters Bumblebee, Lockdown and Optimus Prime, to be delivered close to the June 27 debut of the movie in theaters.

The coins use lenticular technology to show the characters making the transformation from robot to vehicle that gives the Transformers franchise its name. This is the fourth series of coins to be issued for the movie franchise since 2009, when coins were issued to coincide with the release of the first movie; each of the two subsequent sequels has been celebrated with coins, and many of the earlier coins have sold out.

According to the mythology behind the series (based on a toy line), 4 million years ago on the planet Cybertron, emotional and perceptive robots with the ability to think and feel, known as “Transformers,” inhabited the planet. This highly intelligent race of “robots in disguise" was divided into two opposing groups, the heroic and admirable Autobots, and the evil Decepticons. With the ability to disguise themselves by transforming into everyday vehicles such as cars and trucks, the robots can take on many different forms.

The reverse of each coin shows the featured character in colorful, lenticular format, along with the coin’s weight and fineness, and the Perth Mint’s P Mint mark. Inscriptions identifying the character and the franchise also appear on the reverses, which were designed by Jennifer McKenna.

Optimus Prime is “a brave and compassionate commander” leading the Autobots to improve the universe, according to the Perth Mint. Optimus Prime finds himself constantly in battle with the Decepticons in his quest to protect the inhabitants of Earth, and the universe at large.

Optimus Prime is depicted as a Western Star truck upon transformation.

As a close ally of the humans, Bumblebee was sent to Earth to protect Sam Witwicky in Transformers, becoming his car. In that first movie in the franchise, he transformed from a 1977 Camaro to a newer, sexier, 2009 Chevrolet Camaro after Sam’s girlfriend Mikaela mocked the vintage model.

“Bumblebee is one of Optimus Prime’s most trusted Autobots. What he lacks in size, he more than makes up for in courage, determination and bravery, proving there is certainly more than meets the eye to the Autobots loyal ‘little brother,’ ” according to the Perth Mint.

Lockdown is a rogue Transformers Decepticon, with a head that can change into a gun, and is “now a ruthless bounty hunter who will stop at nothing to bring his bounty in.”

In the original Transformers animation, he was an Autobot Cyber Ninja who trained under Yoketron, before being banished for betraying him. Lockdown later returned to kill Yoketron as his first job as a bounty hunter. In the fourth instalment of the Transformers movie franchise, Lockdown is back with a vengeance. On the coin, Lockdown transforms from a robot into a Lockdown vehicle.

The coins show the Ian Rank-Broadley effigy of Queen Elizabeth II on the obverse, with the denomination and year of issue.

Each of the coins is licensed by Hasbro, which owns the Transformers toy brand, and is limited to a mintage of 5,000 pieces.

Each coin is housed in an cube-shaped presentation case which, with the press of a button, flips the lid open revealing the coin surrounded by light. This presentation box comes in a illustrated shipper, accompanied by a numbered certificate of authenticity.

Distributor Talisman Coins offers the coins to collectors in North America for $89.95 U.S. each (here, here and here) or in the three-coin set for $249.99.