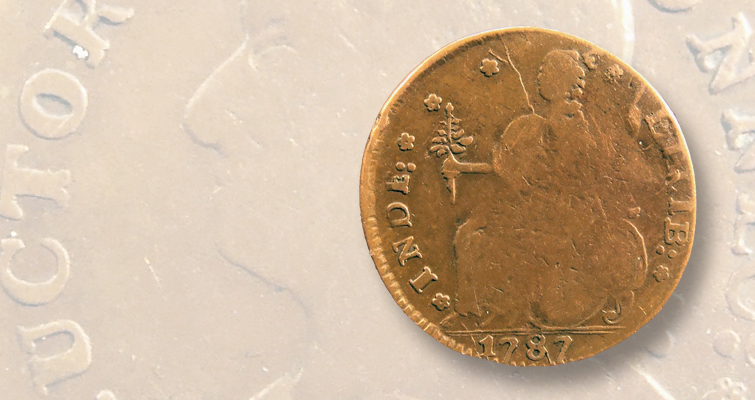 ANACS has authenticated only the third known example of a variety of 1787 Connecticut copper, identifiable through its reverse die cracks around the date and in front of the portrait. 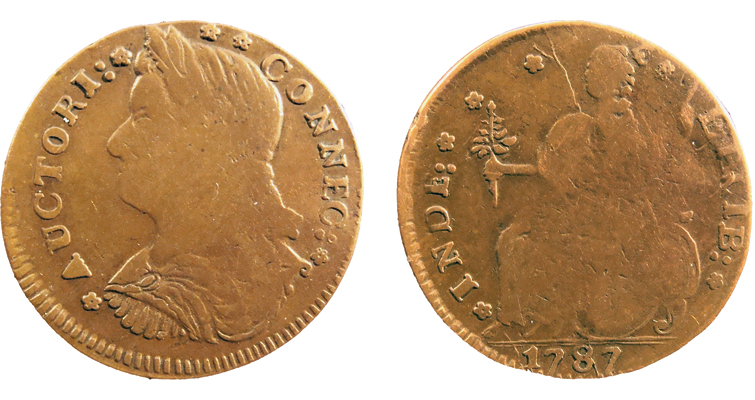 The third known example of a specific variety of 1787 Connecticut copper is authenticated and graded by ANACS.

The current coin was attributed for ANACS by variety attributer John Roberts. The coin, graded by ANACS as Very Fine 20, is identified as W-4325 as attributed in The Whitman Encyclopedia of Colonial and Early American Coins by Q. David Bowers, and Miller 49.2-Z.27, as attributed according to The State Coinages of New England by Henry Miller.

The collector indicates he’s had the 1787 Connecticut copper for years amassed and stored in a single container and it’s only now that he’s begun to have many of the coins attributed.

“The Connecticut copper coinage offers considerable variation and can be challenging to attribute,” Roberts said. “In addition to the date and portrait type, the basic Miller listings are divided by the patterns of the legends, punctuation and ornamentation. They are then cataloged by specific working die based on other characteristics.

“The two cinquefoils above the hair clearly indicated the obverse was one of the two group 49 dies. This greatly limited the known possible pairings. The reverse matched the legend layout described for group Z dies. The coin in question has a prominent branching die crack from Liberty’s shoulder to the rim.”

Early copper specialist Bob Grellman examined images of the coin and was able to quickly identify the coin. “My impression of the coin: a choice Connecticut copper, regardless of the variety. Lightly worn with smooth surfaces and free of any notable defects,” according to Grellman. “All the die features and cracks are clear. Far superior to the discovery coin.”

“Both dies are rare and the combination is extremely rare,” Grellman continued. “Completing a collection by Miller numbers is virtually impossible regardless of your ability to pay. There are many hundreds of die varieties in the 1785–1788 series and acquiring half of them is a major achievement. And if you limit your collection to smooth, problem-free pieces then your task is absolutely unachievable. But acquiring a nice example that shows each of the individual dies (not every die combination), while very challenging, is an achievable goal.

“And this piece represents two of the tougher dies.”

Early copper specialist Randy Clark has a new book, The Identification and Classification of Connecticut Coppers, coming out this summer published by the Colonial Coin Collectors Club, “But this piece did not come out in time to be included,” Clark noted, “which is a shame.”

Clark added: “There are 354 Connecticut coppers varieties now listed in the main body of the series. Only five of them were discovered in the 21st century, each still very rare (R8-R9 or URS1-3) [meaning one to three examples known]. The 1787 M49.2-Z.27 was first discovered in 2005 and documented in the Fall 2007 C4 Newsletter.

“This exciting new piece becomes the third known and shows important details not seen on other examples. New finds of such high rarity and grade are very important to Connecticut coppers researchers to understand and document the series, and will no doubt be of great interest to collectors, as well.” 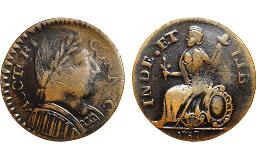 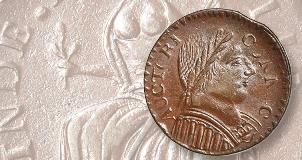 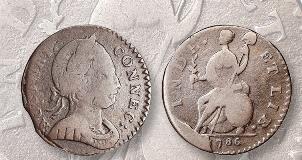