The trouble with mintages 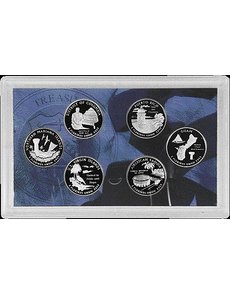 Introduction of specialized Proof sets, such as the 2009 D.C./U.S. Territories quarter dollars set, has made compiling mintage figures for individual coins much more difficult than in past years when just one Proof set was produced.

Knowing a coin’s mintage is one part of establishing its value, but for some modern Proof coins, accurate mintages are elusive.

Compiling each year’s mintages for Proof coinage was once simple for numismatic editors. The Mint sold one set each year containing Proof coins; if it sold 3,554,806 1980-S Proof sets, for example, then the mintage for each coin in the set was also 3,554,806.

Then, starting in the early 1980s and continuing into the new century, things got more complicated.

Mint sales and marketing began issuing additional products containing Proof coins. Since 1983, collectors have been able to purchase Proof sets packaged with commemorative coins and Proof sets housed in enhanced packaging; they could buy Silver Proof sets containing the dime through half dollar in silver, and the other coins in their standard compositions; they could acquire Proof sets of circulating commemorative coins like the State quarter dollars (in silver and in copper-nickel clad) and Presidential dollars; and other special products.

Since Mint officials have not provided individual mintages for each Proof coin, numismatic editors have had to compile these numbers themselves by tracking sales of each product containing the Proof coins. Forget to add an obscure Mint product such as the 2012 America the Beautiful Quarters Three-Coin set for the Arcadia National Park quarters, and your mintage figures are off.

To make the task of compiling the individual Proof coin mintages even more difficult, all of these products go off sale at different times and take months to reconcile (final, audited figures for some 2009 Proof products did not become available until 2011).

Given all of the hurdles mintage compilers have to leap over, it’s not surprising that standard price guides have different mintages. That will undoubtedly frustrate future collectors as they attempt to determine which numbers are most accurate. ¦