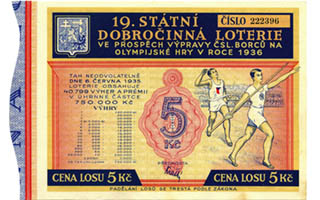 This colorful lottery ticket was issued in 1935 by Czechoslovakia. The face design depicts a track and field runner and a javelin thrower, with a crowd watching in the background. The lottery was designed to raise funds to help send the Czech team to the 1936 Summer Olympic Games.

As this is being written, the 2014 Winter Olympic Games in Sochi have recently concluded.

This event triggered a memory of a “near-paper money” item from a collection that I have enjoyed through the years — old lottery tickets.

While my main focus for this collection is usually World War II-era German lottery tickets, I recently came across a ticket from a lottery from Bohemia-Moravia, more commonly known as Czechoslovakia.

The lottery was designed to help fund the 1936 Summer Olympic team from Czechoslovakia.

The ticket was issued in 1935 as part of a lottery that paid out 750,000-koruna in prizes. The ticket cost 5 koruny. It depicts a track and field runner as he breaks through the ribbon at the finish line and a javelin thrower getting ready for his event.

The left end of the ticket is cut in a wavy fashion, with no two tickets cut exactly alike. Therefore, tickets could be matched to their original stubs if presented for payment.

The back design contains details about the lottery in five different languages, indicating the ethnic diversity of Czechoslovakia during the years between World War I and the coming World War II.

History, of course, reminds us that the 1936 Summer Olympic Games were held in Berlin, where Hitler attempted to showcase the exploits of the “master race.”

The United States was a distant second with 56 medals, the only other nation to earn more than 22 medals in the competitions.

Within a matter of three years, the world descended into global conflict and Czechoslovakia, which had been created after World War I, was dismembered by officials in Germany, Hungary and Poland starting in 1938 and through 1939.

This lottery ticket will probably never be worth more than $40 or $50, but it does give us a window on past events.

For all who see it, this tangible item helps tell the poignant story of the 1936 Olympic Games, the last presented before World War II changed the world forever.