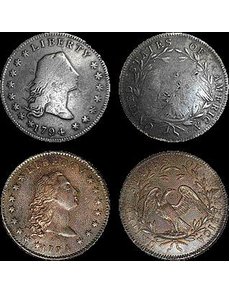 Compare the fake 1794 Flowing Hair dollar, top, with the genuine 1794 coin, bottom, and you will see the differences in the position of the lettering above Liberty’s head, the location and shape of the wreath leaves on the reverse, and the appearance of the four hair strands behind Liberty’s head.

The 1794 Flowing Hair silver dollar is a classic rarity in the United States coin series. With a mintage of only 1,758 pieces, and less than 10 percent of the mintage still in existence, the 1794 silver dollar is a highly desirable and expensive coin. It is currently priced in Coin Values at $100,000 in Very Good 8 condition, with nicer examples exceeding half a million dollars.

One of the problems with high quality cast counterfeits is that you need a genuine coin to produce your casting molds. In the case of the 1794 silver dollar, this can be much too expensive for the typical counterfeiting operation, so the counterfeiters have turned to making hand-cut dies. If the die cutter making the fake dies is skillful, the resulting counterfeits can be a chore to detect by the average collector.

The struck counterfeit 1794 silver dollar shown here falls somewhere near the middle of the skill range.

When you compare the fake to the images of a genuine 1794 Flowing Hair dollar, you can see the differences in the position of the lettering above Liberty’s head, the location and shape of the wreath leaves on the reverse, and the appearance of the four hair strands behind Liberty’s head.

Like many modern Chinese counterfeits, when you have images of a genuine coin for comparison purposes, detection is pretty easy. Without a genuine comparison piece, it can be much more difficult.

Even though the counterfeiter didn’t do the best job cutting the fake dies, he or she did an excellent job with the edge lettering, coming very close to matching the edge on a genuine coin. The artificial wear that this fake has received also makes the piece more “acceptable” at first glance.