Silver medal a first in 2013 Coin and Chronicles set 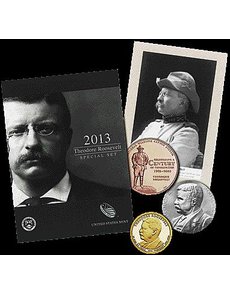 Collage depicts the elements in the set, including a 4-inch by 6-inch print recognizing Theodore Roosevelt’s military service and a booklet with further information about the 26th president. 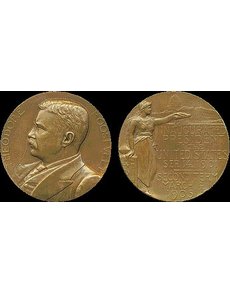 The Theodore Roosevelt presidential medal, originally issued in bronze in 1.3125-inch and 3-inch sizes (shown), will be struck on American Eagle 1-ounce .999 fine silver planchets for the set. 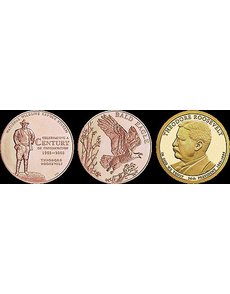 The 2013 Coin and Chronicles Set — Theodore Roosevelt will also include a 1.5-inch bronze medal originally issued for the National Wildlife Refuge System Centennial in 2003, along with a Proof 2013-S Theodore Roosevelt Presidential dollar, not shown here.
Previous
Next

The Theodore Roosevelt Presidential medal included in the 2013 Coin and Chronicles set will be the first version of the medal struck in .999 fine silver by the United States Mint.

U.S. Mint spokesman Michael White said Dec. 5 that the silver medal will be struck on the same 40.6-millimeter planchets that are used for the American Eagle 1-ounce silver coins. The medals will have no specialized finish.

In addition to the silver Theodore Roosevelt Presidential medal, the 2013 Coin and Chronicles Set — Theodore Roosevelt, to be offered priced at $57.95 each beginning at noon Eastern Time Dec. 17, also includes:

? A 4-inch by 6-inch print honoring President Roosevelt’s military service. The print is issued by permission of the Theodore Roosevelt Collection at Harvard University, according to U.S. Mint officials.

The set also includes a booklet with educational information about the 26th president of the United States, highlighting his legacy as soldier, statesman, and conservationist.

The obverse of the Roosevelt silver medal features his portrait, with the inscription THEODORE ROOSEVELT centered along the border of the medal.

The reverse of the medal features the inscription INAUGURATED PRESIDENT OF THE UNITED STATES SEP. 24, 1901. SECOND TERM MARCH 4, 1905.

To the left is Columbia, her right hand resting upon a column bearing a cinerary urn, and devices symbolizing the authority of the United States. The U.S. Capitol appears in the background.

The obverse was designed and sculptured by U.S. Mint Chief Engraver Charles E. Barber and the reverse by Assistant Engraver George T. Morgan.

Collector versions of the Theodore Roosevelt medal were originally issued by the U.S. Mint in bronze 3-inch and 1.3125-inch sizes.

The 1.5-inch bronze Bald Eagle medal obverse design features a portrait of Roosevelt standing on a mountain cliff with the inscriptions NATIONAL WILDLIFE REFUGE SYSTEM, CELEBRATING A CENTURY OF CONSERVATION, 1903-2003, and THEODORE ROOSEVELT.

The reverse design depicts a bald eagle in flight with a treetop in the background and the inscription BALD EAGLE at the top right.

The reverse was designed and sculptured for the 2003 medal by then Mint Sculptor-Engraver Donna Weaver.

The Bald Eagle medal is one of four medals originally produced by the U.S. Mint in 2003 to mark the 100th anniversary of the National Wildlife Refuge System which Roosevelt helped establish in 1903.

In 2003, then U.S. Mint Sculptor Engraver Norman E. Nemeth designed and sculptured the Roosevelt design common to four medals, which were struck in .900 fine silver.

The four medals bore reverses depicting one of the following: the bald eagle; two canvasback ducks in flight against a wetlands background; an elk standing on prairie grass with rocky landscape in the foreground; or a leaping salmon in full side view in the foreground, and a second smaller salmon leaping in the background.

The Bald Eagle medal was also struck and offered in bronze.

The National Wildlife Refuge silver medals were the first U.S. Mint products to be produced with dies subjected to a computer-driven “laser-texturing technique” that later became the standard technique, replacing the older “grit-blasting” technology for “frosting” Proof dies.

All of the 2003 medals were struck at the Philadelphia Mint.

Orders for the 2013 Coin and Chronicles Set — Theodore Roosevelt will be accepted at the Mint’s catalog at www.usmint.gov/catalog and by telephone at 800-872-6468.

The Mint is imposing no household ordering restrictions for the 2013 set and no maximum production limits.