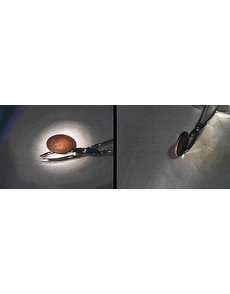 This 1906 Indian Head cent has a reeded edge but the unusual edge device is likely not of Mint origin. It is very likely that the coin’s reeded edge was added after it was struck. Who altered the coin or why remains a mystery.

I have a 1906 Indian Head cent with a reeded edge that I’ve had for about 35 years. My father gave it to me when I was a child. Is there any way to tell if it is an error, and if so, what would its value be? I took it to a coin dealer in my hometown and he said it would need to be authenticated, but he didn’t have the equipment to do that kind of thing. I would appreciate any help or advice you could give me.

Because Indian Head cents, like all U.S. small cents and 5-cent coins, were not typically struck by the U.S. Mint with reeded edges, this piece certainly raises some eyebrows.

Richard Snow of Eagle Eye Rare Coins and author of many works on Indian Head cents, viewed the submitted images of the piece and stated that the coin exhibits “post-strike damage,” meaning that the reeding was applied after the Philadelphia Mint struck the coin. Who altered the coin and why remain unanswered questions.

As for the coin’s value, what price this coin would achieve in the open marketplace is hard to determine. A 1906 Indian Head cent by itself is a rather common issue. The piece in question would likely not appeal to a collector seeking an unaltered example.

While this reeded edge cent is a curiosity, other instances of 1-cent and 5-cent coins bearing reeding outside the norm are known. For example, some reeded edge Lincoln cents and Indian Head 5-cent coins were offered as a promotional gimmick for the 1941 American Numismatic Association’s 50th Anniversary Convention in Philadelphia. The coins were provided by Philadelphia coin dealer Ira S. Reed, and were probably meant to be a pun on his name.

The November 1941 Numismatist reported: “One of the novelties of the Philadelphia convention bourse tables was the sale of the U.S. 5-cent nickel with reeded edges. It has been stated on excellent authority that the coins were prepared in the U.S. Mint.” Collectors today believe the reeding was done outside the Mint.

Some cents were purposefully given a reeded edge by the Mint, most notably the 1795 Liberty Cap, Reeded Edge cent, which sold for $1,265,000 at a September 2009 sale conducted by Larry and Ira Goldberg, Auctioneers, in conjunction with McCawley & Grellman. It was the first U.S. large cent to break the $1 million barrier at auction.

The only Mint-struck reeded edge 5-cent coins are silver half dimes.