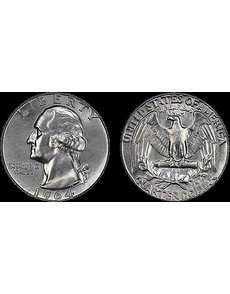 This 1964 Washington quarter dollar graded Special Mint Set Mint State 68 was part of a five-coin 1964 SMS that sold for $151,200 in a private transaction earlier this year.

Because of their transparency, auctions lend themselves nicely to market analysis columns. However, thousands of private transactions happen each day that often go unnoticed or unreported.

Thankfully exceptions occur, and in April George Huber of VDB Coins announced that his firm had brokered a deal for the finest-known Professional Coin Grading Service certified 1964 Special Mint set for $151,200 between dealer David Schweitz and an “anonymous Western collector.”

The purchaser intends to keep the set intact.

Each coin in the five-coin set grades SMS Mint State 68 but for the 1964 Kennedy half dollar, which at SMS MS-69 is the finest known.

While Special Mint sets were produced as an alternative to Proof sets from 1965 to 1967, 1964 SMS coins are mysterious. There’s no documentation surrounding the production of 1964-dated SMS coins. They don’t look like circulation strikes, traditional Proof coins or even the 1965 SMS coins that followed. Further, they have all emerged in the past several decades and are nearly all in exceptional condition.

Schweitz’s comments in the April 23 press release are illuminating. He stated: “We obtained this set a few years ago from dealer-collector Jesse Lipka, who recognized the sets as something special when they started appearing at Stack’s auctions in 1993. Jesse aggressively cracked out and resubmitted numerous pieces to PCGS over a period of a decade or so; as a result, the certified populations are inflated. These coins are far rarer than generally thought, particularly the half dollars. We believe they are among the rarest U.S. coins from the second half of the 20th century.”

Huber is developing a complete illustrated roster of all surviving 1964 SMS coins to help remove duplicate coins in grading service population reports, to ultimately determine the true rarity of these interesting coins. ¦