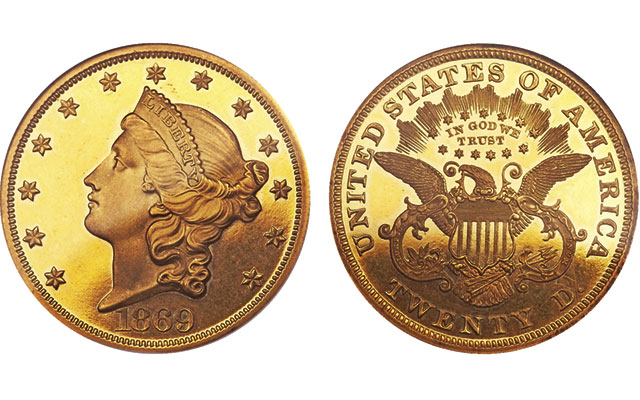 A Proof 1869 Coronet gold $20 double eagle was the sole coin to crack the six-figure mark at Heritage’s Jan. 29 to Feb. 1 Long Beach Expo auction. It brought $229,125, and the total prices realized approached $7 million.

The rare double eagle, graded Proof 65 Ultra Cameo by Numismatic Guaranty Corp., is from a mintage of 25 pieces, of which around a dozen are known to survive today. Of these dozen or so pieces, three are in public collections: two in the National Numismatic Collection at the Smithsonian Institution and another in the collection of the American Numismatic Society.

The offered piece is listed as the finest known in the roster of examples. A different example, graded Proof 65 Cameo by NGC, set the record for the issue when it sold at auction in Superior’s Father Flanagan’s Boys Home Sale in May 1990 for $308,000.

Heritage wrote of the piece just sold, “We can find no previous auction appearances for this coin and believe it has been off the market for decades.”

Heritage notes that all 1869 Proof double eagles were originally offered as part of six-piece Proof sets in 1869, citing Walter Breen who stated that the six-coin Proof set cost $57 at the time, which represented a hearty premium for coins totaling just $43.54 in face value.

“Since collecting double eagles was not popular in the 19th century, proof twenties tended to be sold cheaply by gold proof set purchasers, who retained the lower-denomination coins for their collections,” the lot description adds. Some of the higher-denomination Proof coins of this period were spent for face value due to the relatively low premiums that they were seeing in the marketplace and one of the known Proof 1869 Coronet double eagles is impaired.