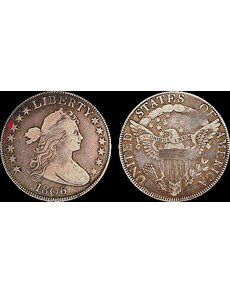 The Overton 127a variety of 1806 Draped Bust half dollar is characterized by the heavy die break at the star 6 position shown by the arrow on this recently identified example.

A new example of a rare die variety of 1806 Draped Bust half dollar has been identified in a collection of United States coins that Texas dealer Vic Bozarth recently acquired during a West Coast buying trip.

The Overton 127a variety (cataloged in Early Half Dollar Varieties: 1794-1836 by Al C. Overton and Donald Parsley) was reported by numismatist W. David Perkins in the April issue of the John Reich Journal. The periodical is the official publication of the John Reich Collectors Society.

Professional Coin Grading Service has certified the coin as Very Fine 25, and it is stickered by Certified Acceptance Corp. for quality. Numismatic researcher and Bust half dollar specialist Steve Hermann believes the new discovery to be the finest known or tied for the finest among the examples known of the O-127a variety of 1806 half dollar.

Another PCGS VF-25 example is in the collection of a JRCS member, Perkins reports.

The number of known examples, depending on the researcher reporting the statistics, ranges from a dozen, to as many as 18 or 20. Most examples known are heavily circulated, with a number having problems such as porosity or scratches.

Bozarth said Mike Clark, his associate who attributes a large percentage of the early U.S. material he acquires, attributed the coin in late March after both inspected the coin and noticed the significant die break on the coin’s obverse at the 10 o’clock position.

Bozarth said he plans to offer the new discovery at auction later this year.

In the fourth edition of Early Half Dollar Varieties: 1794-1836 by Al C. Overton and Donald Parsley, published in 2005, the authors describe the variety’s diagnostics:

The obverse is the same as that for 1806 Overton 127, “except for a die crack that develops from milling through lower points of star 6 which becomes much heavier later and extends to ribbon.”

The authors of the 2005 book placed a Rarity 7 rating on both the O-127 and O-127a varieties, suggesting an extant population of four to 12 examples each.

According to Hermann’s spring 2013 revision of his Auction & Mail Bid Prices Realized for Bust Half Dollars 1794-1839, the last reported sale of an 1806 Overton 127a half dollar was December 2009 when a Numismatic Guaranty Corp. About Good 3 example was sold by Heritage Auctions for $2,300.

Hermann’s guide notes a PCGS Fine 12 example was sold by Heritage in January 2008 for $9,775. An uncertified Very Fine 20 example, with “a bit of porosity and cloudy surfaces” sold in June 2006 for $8,107 in a mail-bid sale conducted by Bust half dollar specialist and California dealer Sheridan Downey.

Only one example is currently known of the 1806 O-127 coin, an early die state that appears without the die break that is found on the later O-127a die state, at the Star 6 position to the viewer’s left on the obverse.

Downey reported the find of the lone early die state O-127 coin in the December 1988 John Reich Journal where he identified the condition of the coin as “a solid VF.”

Tucson, Ariz., dealer Elliot Goldman of Allstate Coins acquired the coin in May 1988 among purchases he made at a Denver coin show.

Goldman eventually sold the coin for an undisclosed sum to Downey, who placed the coin with a collector in the Eastern United States, according to Downey. ¦