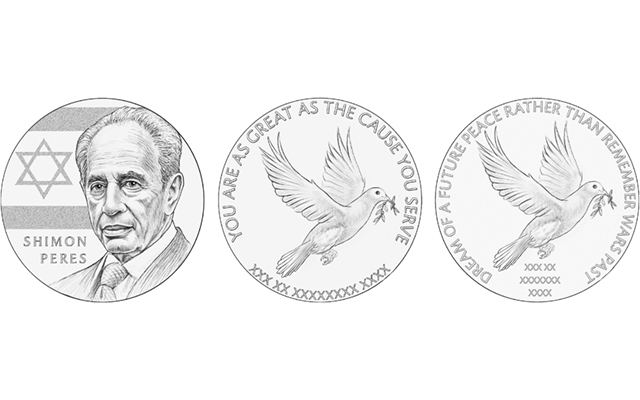 The recommendations were made in anticipation of President Obama signing the authorizing legislation into law.

H.R. 2939 was forwarded May 30 to the president for his signature. President Obama signed the bill into law on June 9, a week after the CCAC considered the proposed designs.

The same designs recommended by the CCAC were recommended separately June 2 by the Commission of Fine Arts in a telephone poll of its members, according to the CFA’s executive director, Thomas Luebke.

The review and recommendation process was accelerated to meet a deadline to present the finished medal to Peres before the end of June.

The congressional gold medal is in honor of Peres’ maintenance of strong bilateral relations between Israel and the United States, beginning in the days of President John F. Kennedy when Peres served as Israel’s deputy defense minister.

The CCAC reviewed one proposed obverse design and two versions of a proposed reverse design.

The sole obverse depicts Peres, 90, in a suit, superimposed over a flag of Israel. Peres’ staff recommends that the stripes in the flag be reduced in size because, as preliminarily depicted, they are too thick in relationship to the Star of David. The obverse was designed and is being sculptured by U.S. Mint Sculptor-Engraver Donald Everhart II.

Both reverse designs offered depict a dove in flight with an olive branch in its beak.

The reverse recommended features the inscription around: YOU ARE AS GREAT AS THE CAUSE YOU SERVE. Along the bottom border, a series of X’s served as placeholders for the inscription ACT OF CONGRESS 2014. The reverse was designed and is being sculptured by U.S. Mint Medallic Sculptor Joseph F. Menna.

The reverse not recommended by the CCAC featured the same central device, but with the inscription around, in slightly smaller size and a different letter font, DREAM OF A FUTURE PEACE RATHER THAN REMEMBER WARS PAST. Below, X’s in three lines were to accommodate ACT OF CONGRESS 2014 in three lines.

The law provides for bronze duplicates of the Peres gold medals to be struck by the U.S. Mint for sale to the general public.