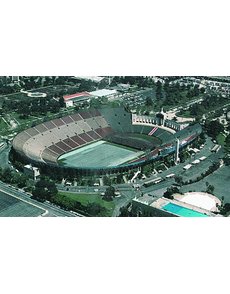 The Los Angeles Coliseum, which hosted the Summer Olympics in 1932, needed extensive renovations to accommodate the 1984 games. The sale of commemorative coins was one source of funding.

Image courtesy of the Southern California Committee for the Olympic Games.

The first, a double-decker banner, announced the unanimous subcommittee passage of a proposal to honor George Washington on the 250th anniversary of his birth in 1982.

Even before the Washington commemorative legislation could be voted on by the full House of Representatives, legislators from California joined by other influential leaders in Congress, at the behest of the Los Angeles Olympic Organizing Committee, were introducing bills in both the Senate and the House seeking a massive 29-coin commemorative program.

Fundraising was of prime concern for the Los Angeles Olympic Organizing Committee. Unlike many other Olympic host nations, there would be no U.S. government (taxpayer) funding. Money to pay for refurbishing some sports venues and building new ones had to come from the private sector.

Los Angeles had hosted the 1932 Summer Games, but the 1984 production would be larger and grander than anything ever planned in the United States. Plus, U.S. prestige was on the line. The United States had boycotted the Moscow Olympics in the summer of 1980. It was important to not only have showplace venues, but to train athletes to “bring home the gold.”

Los Angeles Olympic planners did what many fundraisers do. They devised a budget and then set about raising the money to fund the budget.

The Soviet Union had issued 28 silver coins and six gold coins to honor the 1980 Moscow Games.

From the perspective of Los Angeles Olympic planners, domestically it would be a patriotic sell. Everyone in the United States would buy Olympic coins to support staging the Los Angeles Games and to ensure U.S. athletes would have the best of Olympic training facilities. But planners had their eyes on the world market, also.

Since the U.S. Mint, at the time, had little marketing experience, the legislation called for the coins to be delivered to the Los Angeles Olympic Organizing Committee for distribution and sale worldwide through a marketing entity that LAOOC would select.

The legislation appeared to be on a fast track, with a July 14 Senate hearing already scheduled.