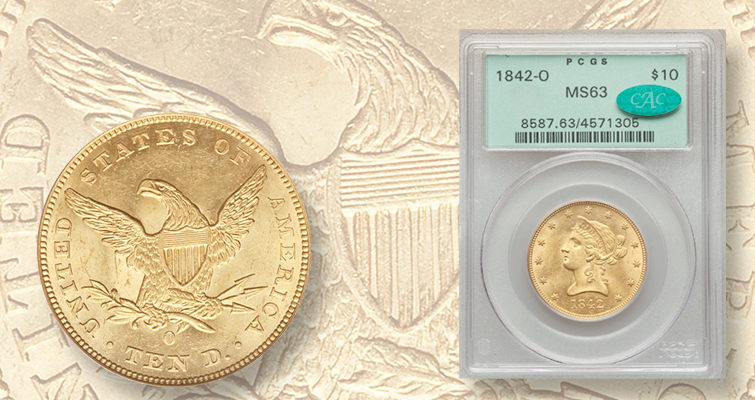 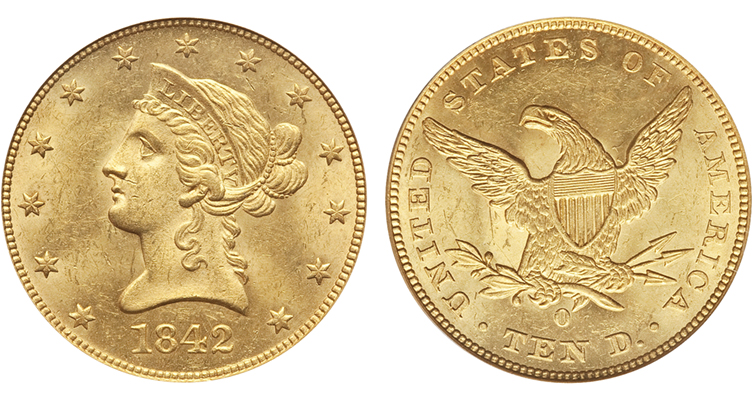 The finest-known 1842-O Coronet gold $10 eagle, graded MS-63 with a green CAC sticker, has been off the market for several decades and is a highlight of Heritage’s February Long Beach auctions. 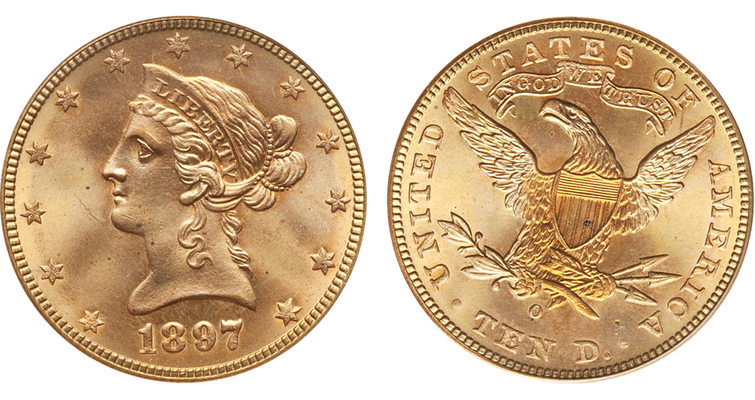 A virtually flawless MS-67 1897-O Coronet $10 eagle with a green CAC sticker is also the finest known for this date and Mint.

A noteworthy collection of gold $10 eagles will highlight Heritage’s Feb. 21 to 26 auctions held in conjunction with the Feb. 22 to 24 Long Beach Coin, Currency, Stamp & Sports Collectible Show in Southern California.

Among the condition rarities in the offering are two key issues from the New Orleans Mint. Heritage describes an 1842-O Coronet gold $10 eagle graded Mint State 63 by Professional Coin Grading Service with a green Certified Acceptance Corp. sticker as a “monumental offering” since it is the finest known of just four or five Mint State 1842-O gold eagles that are known to have survived from an original mintage of 27,400.

Some examples of the issue were recovered from the SS Republic shipwreck, but these were largely circulated; just one Mint State example (graded MS-61) was recovered.

As Heritage notes, consistent with the offered coin’s MS-63 grade, “Chatter occurs on each side and there are a couple of obvious abrasions near the nose, but they are minor in the grand scheme of things. Brightly frosted yellow-gold surfaces display a strong impression.” This example was last offered more than two decades ago at a 1996 Stack’s auction, where it sold for $26,400. Since it is the finest of just three Uncirculated examples graded by PCGS, Heritage warns bidders, “We would not be surprised in the slightest to see it disappear into strong hands for a similar length of time following this appearance.”

Another stunner is a “nearly flawless” 1897-O Coronet $10 eagle graded MS-67 by PCGS, also with a green CAC sticker, that is also the finest known. It is housed in an older PCGS holder that was used by the grading service between 1990 and 1993. As Heritage explains, “There is often a degree of subjectivity involved in the determination of a finest-known coin, especially when two or three examples exist with the same technical grade. Other times the answer is more clear-cut. This is one of the latter.” It was purchased directly from the U.S. Mint at the time of issue by J.M. Clapp for face value and was later acquired by Louis E. Eliasberg Sr. when he purchased the Clapp Estate in 1942.

It’s been offered at auction previously just once — at Bowers and Merena’s October 1982 auction of the Eliasberg collection’s gold coins — where it sold for $10,450. In that sale it was cataloged as “an absolutely spectacular example of this New Orleans Mint issue.” A few small marks on Liberty’s chin are the only imperfections of note and both sides display pleasing peach-gold color and shimmering luster.

The mintage was a relatively low 42,500, but a decent percentage of the surviving population remains in Mint State grades, suggesting that some were saved at the time of issue, while others have resurfaced from European bank vaults in recent years. 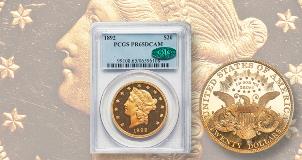 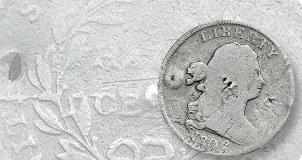