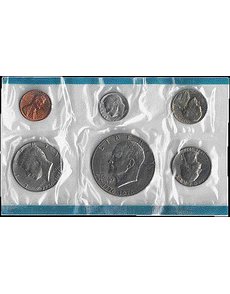 Coins from a 1975 Uncirculated Mint set that were struck at the Philadelphia Mint do not carry a Mint mark. The circulation-quality dime in the set should not be confused with the rare Proof 1975 No S dime.

I am writing because of a Coin World article by William T. Gibbs, posted online at www.coinworld.com/, about the 1975 No S Proof set.

My grandfather collected coins and after his passing I inherited a bunch of Proof sets. There were four 1975 Proof sets. One of the packs in the Proof set had red lining and the other with blue lining had coins that don’t have Mint marks. Is this the coin being talked about in the article?

You have an Uncirculated Mint set from 1975, not a Proof set.

The 1975 Proof sets were housed in a hard plastic holder that was then slipped into a cardboard sleeve.

The coins in a Proof set would have bright, mirrored surfaces, and on some pieces, frosted devices.

“The finish and lack of a Mint mark set the two Proof 1975-S Roosevelt, No S dimes apart from the millions of otherwise similar pieces,” wrote Gibbs.

The San Francisco Assay Office was producing circulation-quality 1975 dimes at the time that were identical to those produced at the Philadelphia Mint. No Mint mark was used at either facility for the coins struck for circulation.

All Proof 1975-S Roosevelt dimes have an S Mint mark, except for the two known pieces without it.

One of the many dime obverse dies created without a Mint mark and intended for circulation production ended up instead being prepped for Proof production and then used to strike Proof dimes.

Similar mistakes took place in earlier years and again in 1983 and 1990.

Gibbs also noted that “researchers believe that Mint inspectors discovered the mistake and prevented most of the sets with the error dime from being released.”

Coins in your Uncirculated Mint set are of the same quality as coins struck for circulation.

The different color linings correspond with the respective Mints that struck those coins. The red packaging in this case holds coins produced by the Denver Mint, bearing a D Mint mark. The blue packaging contains coins minted at the Philadelphia Mint, intentionally bearing no Mint mark. These dimes do not carry premiums unless in top condition.