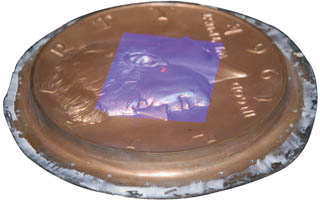 Grid points on the original Kennedy galvano from December 1963 provide target areas for each digital scan taken of specific areas of the design. Each scan represents a separate layer, all of which are eventually meshed into a single image.

The original Dec. 28, 1963, bronze galvano for Gilroy Roberts’ Kennedy portrait for the 1964 half dollar, and the original 1964 obverse hub, were scanned and converted into digital models in the development for 50th anniversary half dollars for 2014.

The Mint used precision equipment and techniques to duplicate the relief and other features found on the original 1964 tooling.

The rim on the restored obverse that will appear on the gold, silver and copper-nickel clad 50th anniversary versions is much wider than on any of the standard 2014 versions.

The reverse rim on all 2014 Kennedy half dollars, however, will be thin, the same width as used on 2013 half dollars.