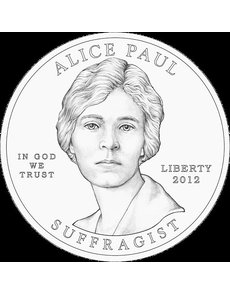 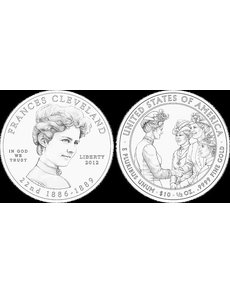 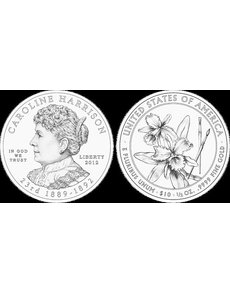 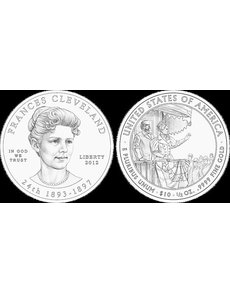 Public Law 109-145, the Presidential $1 Coin Act of 2005, contains a provision for the continuity of the First Spouse Coin Program in the event that a president served without a first spouse. Typically, a First Spouse coin for a president with no spouse would depict a Liberty design taken from a coin that circulating during the president’s term in office, on the obverse, and on the reverse, a presidential scene.

In the case of President Chester Arthur, who was widowed before he took office, the act specifically requires that the obverse design for his corresponding First Spouse gold coin incorporate the name and likeness of Alice Paul, a leading strategist in the suffrage movement, who was born during his term. The act specifies that the reverse design be representative of the suffrage movement.

The First Spouse .9999 fine gold $10 coins will be struck in Proof and Uncirculated versions at the West Point Mint and bear the W Mint mark. The bronze medals, struck at the Philadelphia Mint, will bear no Mint mark.

No schedule has yet been announced by U.S. Mint officials as to when the First Spouse coins and medals will be offered.

The Paul reverse, designed and sculptured by Hemphill, depicts a participant marching in the suffrage parade, holding the flag and wearing a banner that says VOTES FOR WOMEN.

The obverse of the second Frances Cleveland First Spouse gold coin and bronze medal was designed by Fox and sculptured by Hemphill. The reverse, designed and sculptured by U.S. Mint Medallic Sculptor Joseph F. Menna, depicts an event emblematic of Mrs. Cleveland’s popularity with the public.

The obverse of the Caroline Harrison First Spouse gold coin and medal was designed by AIP Associate Designer Frank Morris and sculptured by Gaudioso. The reverse was designed by Donna Weaver, AIP master designer and former U.S. Mint sculptor-engraver, and sculptured by U.S. Mint Sculptor-Engraver Charles L. Vickers. The reverse design represents Mrs. Harrison’s love of flowers and depicts a close-up of an orchid and paintbrushes.

The medals bear the same obverse and reverse designs as the gold coins, but sans any coin inscriptions.

For scheduled coin and medal release dates, visit www.usmint.gov/catalog. Pricing for the gold coins will be based on the United States Mint’s pricing structure for gold and platinum products. ¦