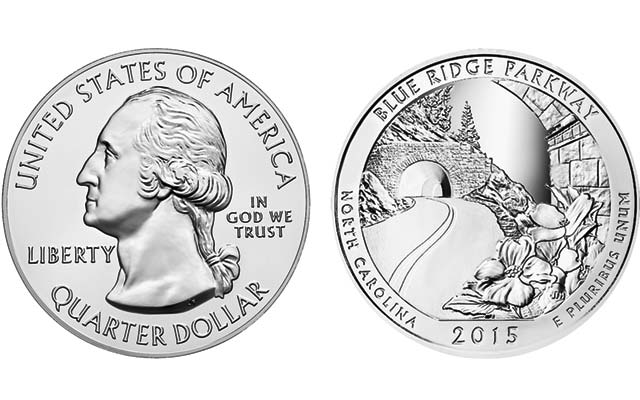 The U.S. Mint suspended sales of the 2015 Blue Ridge Parkway 5-ounce silver bullion quarter dollars to its authorized purchasers June 22, the same day sales began, but production continues, to replenish the depleted inventory of the coins.

Authorized purchasers were notified by Mint officials that the bureau had temporarily sold out of the 5-ounce Blue Ridge Parkway 5-ounce silver coins and that sales would resume when additional coins are struck. June 22 sales were reported at 35,000 coins.

The coins are struck at the Philadelphia Mint without Mint mark, on the same dedicated press that is used to strike the numismatic version, which does have the P Mint mark.

The combined mintage limit for the design is 65,000 coins, divided between the bullion and the Uncirculated numismatic versions.

However, the numismatic version is not yet offered for sale. The Uncirculated 2015-P Blue Ridge Parkway 5-ounce silver quarter dollar is scheduled to go on sale sometime in July, at the introductory price of $149.95.

The numismatic versions are sold directly to the general public by the Mint at a set price above the intrinsic value of the metal in each coin. The price is subject to change according to the Mint's pricing grid based on the spot price of silver.

The bullion versions are not sold directly to the public. Instead, they are sold through a network of authorized purchasers who buy the coins from the U.S. Mint based on the closing PM spot price of the metal on the London market on a given day plus a $9.75 premium per coin. The coins are then resold at a premium to collectors, investors and other dealers.