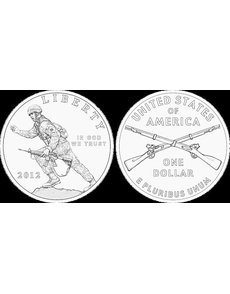 Line art shows the obverse and reverse designs, sans Mint mark and designer/sculptor initials, for the 2012 Infantry silver dollar. A test strike produced at the Philadelphia Mint, but with the W Mint mark of the West Point Mint, was used Oct. 27 for the coin toss before the start of the Doughboy Classic football game at Fort Benning.

The coin used for the coin toss preceding the Oct. 27 Doughboy Classic football game at Fort Benning in Georgia was one of a handful of test strikes for the 2012-W Infantry silver dollar.

The test piece used for the coin toss, as well as any additional test strikes, is ultimately to be destroyed and not retained for historical purposes, according to U.S. Mint officials. The test strikes were struck with a finish not approved for commemorative coins.

Proof and Uncirculated 2012 Infantry silver dollars are to be issued sometime in February, according to U.S. Mint officials.

The second annual football classic pitted the Fort Benning Doughboys against the Columbus State University Cougars. The Doughboys football team is composed of Fort Benning soldiers, many from the 3rd Heavy Brigade Combat Team. Fort Benning is home to the U.S. Army Infantry.

The 2012 prototype commemorative silver dollar was parachuted into Doughboy Stadium along with the game ball by members of the U.S. Army’s Silver Wings parachute team.

Before the coin toss at midfield to open the football game, soldiers in Vietnam War-era uniforms delivered the coin from the sidelines to Marv Levy, a World War II veteran and former NFL head coach of the Buffalo Bills, who was selected for the coin toss.

After the coin toss, promotional fliers describing the coins were distributed to those seated in the stands. Fans could also sign up at a tent manned by the National Infantry Foundation to receive updates on the coin’s production and availability.

Although struck at the Philadelphia Mint where test production is executed, the test piece for the coin toss bears the W Mint mark of the West Point Mint where Proof and Uncirculated production will be struck, according to U.S. Mint spokesperson Jana Prewitt.

The test pieces were struck Oct. 19 at the Philadelphia Mint with what was first described as a “bullion finish” using a master die, not a working production die. What has traditionally been considered a bullion finish is the result of dies that have received no special treatment before striking and blanks or planchets also having no pre- or post-strike treatment.

Normally, test strikes have no definitive finish. However, in the case of the 2012 Infantry silver dollar test strikes, since the U.S. Mint wanted to use a test strike for an event, the die was wire-brushed to add luster and make it more suitable for test strikes, according to Prewitt.

“We normally produce enough test strikes (off the master die) to establish a pattern of consistency for metal fill,” Prewitt said. “Therefore, several test strike coins were produced. The coins will be melted after an amount of time that they are no longer needed for testing or reference. This is a normal part of the process.”

The enabling commemorative coin act calls for the production and issuance of up to 350,000 2011-W Infantry silver dollars. The purchase price of each coin will include a $10 surcharge that will be paid to the National Infantry Foundation to establish an endowment to support the maintenance of the National Infantry Museum and Soldier Center.

The 2012 Infantry dollar’s designs are emblematic of the “courage, pride, sacrifice, sense of duty and history of the United States Infantry.”

The obverse design features a modern Infantry soldier on rocky ground charging forward and beckoning the troops to follow, symbolizing the “Follow Me” motto of the Infantry. The reverse depicts the crossed rifles insignia, the branch insignia of the Infantry.

The adopted designs, approved by Treasury Secretary Timothy F. Geithner, were supported by the veterans foundation, and recommended by the Commission of Fine Arts following their May 19 review of proposed designs.

The introductory and regular issue prices for the 90 percent silver dollars have not yet been established. ¦