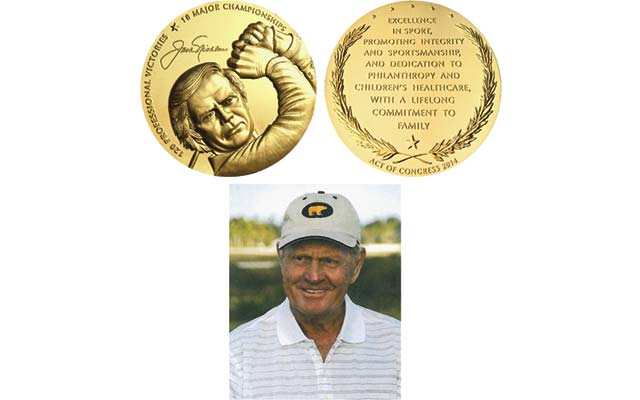 A congressional gold medal authorized in recognition of Jack Nicklaus' contributions to the sport of golf and his philanthropy was presented March 24 in the U.S. Capitol Rotunda.

Congressional leaders presented a congressional gold medal March 24 to golfer Jack Nicklaus in recognition of his contributions to the game of golf and his philanthropic service to the community and the nation.

The ceremony was held in the Rotunda of the United States Capitol.

The Nicklaus medal was authorized under provisions of Public Law 113-210, signed into law by President Obama on Dec. 16, 2014.

The medal's obverse, designed and sculptured by U.S. Mint Sculptor-Engraver Donald Everhart II, features a close-up of the golfer finishing his swing, inscribed around with 120 PROFESSIONAL VICTORIES and 18 MAJOR CHAMPIONSHIPS separated by a five-pointed star. The reverse, designed and sculptured by U.S. Mint Medallic Sculptor Phebe Hemphill, depicts five five-pointed stars along the top border and one along the bottom, with an open wreath of laurel branches within which is inscribed EXCELLENCE / IN SPORT, / PROMOTING INTEGRITY / AND SPORTSMANSHIP, / AND DEDICATION TO / PHILANTHROPY AND / CHILDREN'S HEALTHCARE,  / WITH A LIFELONG / COMMITMENT TO / FAMILY.