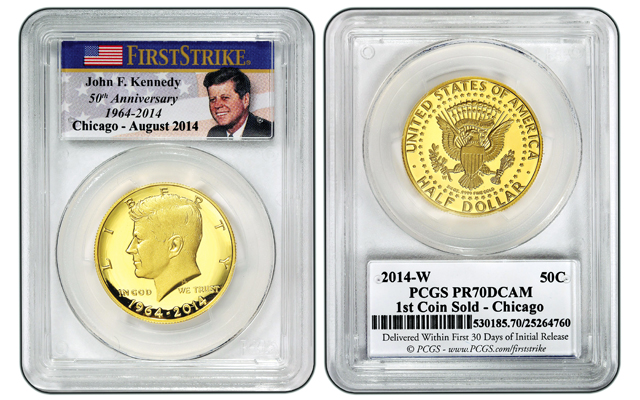 The first Kennedy gold half dollar sold in person to a collector Aug. 5 by the U.S. Mint at the American Numismatic Association World's Fair of Money was resold by two dealers to another collector for $100,000.

The coin that Los Angeles collector Nick Yadgarov purchased from the Mint for $1,240 was sold Aug. 7 by David Hendrickson from SilverTowne and California dealer Kevin Lipton to an unnamed collector. Hendrickson and Lipton had purchased the coin from Yadgarov for $5,000, plus Yadgarov received another gold Proof 1964–2014-W Kennedy half dollar from the two dealers. Hendrickson and Lipton also made the same deal with the next three people in line the first day of sales — Yadgarov's girlfriend, his brother and his sister.

Hendrickson said the collector to whom the Yadgarov coin was sold is a longtime customer who purchases coins over the Coin Vault cable television show, which SilverTowne owns.

The $100,000 coin is certified Proof 70 Deep Cameo by Professional Coin Grading Service. PCGS identified the coin on the grading label as the first Proof gold Kennedy half dollar sold by the Mint at the ANA show. Hendrickson said it was likely the coin would be reholdered by PCGS to accommodate rewording on the label for the coin's identification. The second, third and fourth coins sold that Hendrickson and Lipton purchased also graded PCGS Proof 70 Deep Cameo.

"It's an important coin," Hendrickson said in defending the $100,000 price the Yadgarov coin garnered. "It's the first coin sold — the first coin released of the Kennedy gold coins. There could never be more than one being the first."