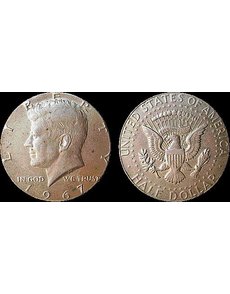 This undersized, underweight 1967 Kennedy half dollar has a genuine exterior that encloses a false core of base metal. 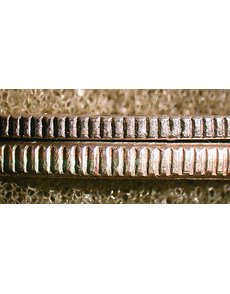 The edge of the half dollar with the false core is shown above the edge of a genuine silver-clad half dollar. 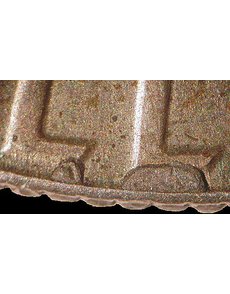 Two droplets of solidified base metal sit on top of the lower bar of each L of the word DOLLAR.

In the course of my investigations I periodically come across novel and ingenious attempts at fabricating fake errors. One was recently sent to me by Casey Morris in the form of a 1967 Kennedy half dollar. He received the coin from his father, who used to work at a bank.

Morris first presented his find on the Coin Community Forum devoted to Mint errors and die varieties: www.coincommunity.com/forum/topic.asp?TOPIC_ID=132278. He described it as slightly undersized, very thin and severely underweight. Normal 1967 Kennedy half dollars are composed of two clad layers of 80 percent silver and 20 percent copper surrounding a core of 79 percent copper and 21 percent silver. The overall silver content is 40 percent. The core appears light gray on most coins.

Morris posted photos of the obverse and reverse faces and these appeared suspiciously normal. I invited him to send me the coin for a detailed examination.

As originally reported, the coin is quite thin and weighs only 6.9 grams. The normal weight for silver-clad half dollar is 11.5 grams. The diameter of Morris’ coin measures 29.70 millimeters, almost a full millimeter shy of the normal 30.61 millimeters. The core is black in color. Reeding is strong and essentially complete all around the edge. When dropped onto a hard surface, the coin has a very dull ring. It is not attracted to a magnet.

The obverse and reverse designs are well-struck, perfectly centered, and appear to have been struck by authentic dies. The color and the pattern of toning and spotting appear typical for this issue.

The design rim is thin and incomplete. However, where present, the design rim seems to be of normal height and clarity.

Anyone familiar with the minting process and the appearance of genuine errors should already have picked up on several fatal discrepancies.

A planchet this thin will almost always show a weak strike. A thin planchet is closer to the minimum die clearance and will therefore not receive as strong an impact.

A coin struck on an undersized planchet is seldom perfectly centered. The planchet tends to settle toward one side of the striking chamber.

A coin that is significantly smaller than normal will never show full, strong reeding all around. The final size of a coin is determined by the diameter of the collar. An undersized planchet that does not expand fully within the striking chamber will not reach the working face of the collar at all points.

A coin struck on an undersized planchet will almost always show metal flow in its peripheral letters. With no restriction on its expansion, the coin metal “squeezes out” from beneath the dies and fails to rise fully into the die’s peripheral recesses. The letters become stretched out at the same time. No metal flow of this stretched-out type appears in the peripheral letters of this half dollar.

Although the obverse and reverse designs appear to have been struck by genuine dies, the edge was clearly not struck within a genuine collar. The reeding is crude and the valleys between the ridges are filled with microscopic lumps. The reeding was clearly fabricated after the coin was struck.

My reconstruction of events has this 1967 half dollar starting out as a normal coin. The original reeding was mechanically removed along with the outer portions of the design rim. The coin was then sawn in half along the horizontal plane. This left part of the original copper-silver core attached to each clad layer. On both discs, the core was ground off as far as the clad layer. A layer of black base metal (probably molten) was then fed between the two clad layers and the three layers bonded together as the core solidified. The final step was pressing a set of false reeding into the edge.

Final confirmation of this proposed fabrication process can be found at 5:30 on the reverse face. Two tiny droplets of base metal fell onto the horizontal bar of each letter L of the word DOLLAR. Each hardened droplet stands above the field and above the letter, proving that these were deposited after the strike.

Given the laborious sequence of steps involved, one imagines this was an attempt to duplicate the appearance of a genuine off-metal/wrong planchet error. However, we’ll probably never know the actual motives and mind-set of those responsible for this clever amalgam of genuine and false components.