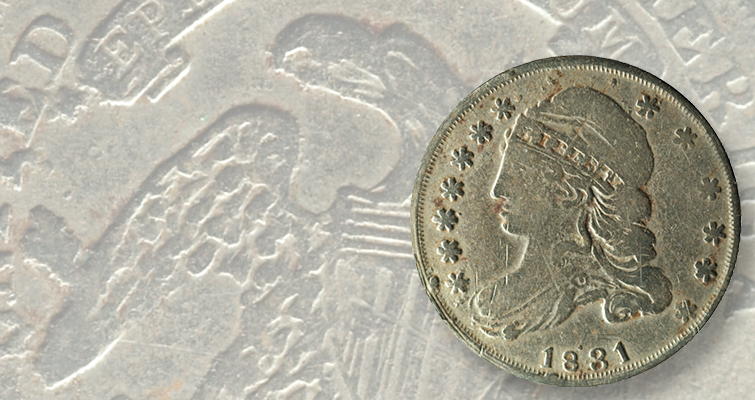 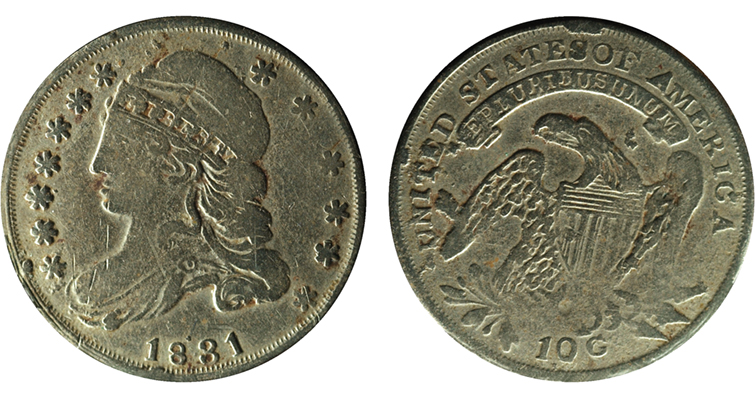 Examples of contemporary counterfeit 1831 Capped Bust dimes are believed to have been die-struck on planchets composed of German silver.

Coin World periodically receives inquiries from readers about older counterfeit coins. Many collectors are familiar with contemporary counterfeit Capped Bust half dollars that circulated alongside genuine coins during the 19th century. Numismatist Keith Davignon published a reference to collecting the counterfeit half dollars by die variety.

What many collectors may not realize is that contemporary counterfeit Capped Bust dimes exist, too, but in paltry numbers when compared to the number of half dollars produced.

Collector and researcher Winston Zack has been extensively researching the fake dimes. His findings are published by the John Reich Collectors Society in the July 2015 issue of John Reich Journal.

Counterfeiters were more likely to choose a date with high genuine mintages, allowing the fakes to blend more easily with the government’s output. Zack said that’s one reason why, as his research indicates, the earliest recorded date on a presumed counterfeit Bust dime is 1825. The majority are dated from the 1830s, when genuine production was considerably higher. Based on his research, fewer than two dozen examples of all dates combined are reported.

Of the examples known, the most common composition is German silver — an alloy of copper, nickel and zinc.

Some pieces are cast and some are die struck. The die-struck pieces are made from hand-cut dies. Cast pieces are considered to have been made with transfer dies using a genuine coin as a host; hence, the die variety of the genuine coin can be ascertained.