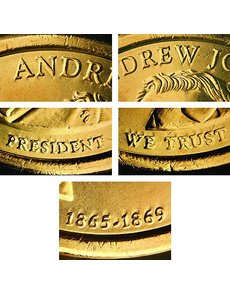 Dimples extend inward from all the peripheral letters and numbers on the obverse face of this 2011-D Andrew Johnson Presidential dollars. The dimples were apparently produced by corresponding elevations on the field portion of the die. The origin of these elevations is unclear.

In my capacity as an error researcher I am frequently confronted with unfamiliar and, at times, inexplicable errors. It is an experience that most longtime collectors and researchers find familiar.

My colleague Robert “BJ” Neff was recently handed a doozy of a mystery by error dealer Fred Weinberg. He sent Neff three 2011-D Andrew Johnson Presidential dollars that show a peculiar effect on the obverse face. All of the peripheral design elements display a shallow dimpled field along their inner side. In other words, the dimples form a centrally directed, converging radial pattern. The effect is easily seen in the accompanying photos, all of which were taken by Neff.

The first problem to address was whether these dimples represented a die error, a planchet error or a striking error. It was immediately apparent that the anomaly was present on the die face. The dimples are identical on all three dollars, and a careful study of die markers undertaken by Neff showed that they were all struck by the same die pair. The presence of dimples on the coin means that the field portion of the die face must have been elevated right next to each peripheral design element.

But what could produce such elevations? My thoughts initially gravitated toward some form of die deterioration doubling. Incuse forms of die deterioration doubling are known among copper-plated zinc cents and on some state quarters. But I’ve never seen a case in which the incuse doubling is located along the inner margin of the normal, raised design elements. Most of the time the doubling extends from the lateral margin of the affected design elements.

Could the defects have been present on master die or a working hub? Probably not, since we’d then expect the dimples to be more widespread among Andrew Johnson dollars. Right now it looks like the dimples are restricted to a single working die.

I had to abandon the idea that the dimples were caused by an abnormally soft working hub or an abnormally hard working die. Either could result in slight compression of raised elements on the face of the working hub and possibly displace enough metal alongside each element to a form pressure ridge. However, were that pressure ridge to be driven into the face of the working die, it would leave a recess. And that, in turn, would leave a bump instead of a dimple on the coin.

Neff has speculated that the dimples arose during the final phases of hubbing as a result of uneven cooling and contraction of the working die face. He correctly notes that the working die heats up during hubbing as the harder working hub forces its way down through the cone-shaped face of the unfinished working die.

After the “squeeze” is completed, the working die begins to cool and, according to Neff, contracts ever so slightly. If the cooling and contraction is uneven and particularly severe, one side of each peripheral recess on the working die face might find its way blocked by the corresponding raised element on the face of the working hub. This could cause a slight pressure ridge to form before the hub is lifted off the die face. The pressure ridge would be responsible for the dimple on the coin’s surface.

While this scenario is possible, I would have expected the phenomenon to have appeared before now and to be much more common.

Until we have a better understanding of the nature and origin of these dimples, it’s best to assign them a nonspecific designation. I would suggest something along the lines of “dimpled design extensions” or “design extension dimples.” While I’m not a great fan of placeholder terms, it’s the best we can do. We certainly wouldn’t be alone in this. After all, astrophysicists have applied the terms “dark matter” and “dark energy” to phenomena that they don’t understand.

I invite the readers of this column to submit other examples of dimples. Perhaps other dies will show the effect. A larger, more diverse sample might illuminate the situation.